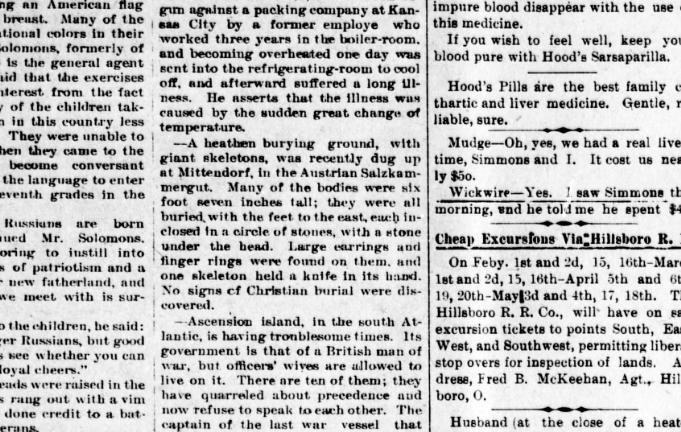 A heathen burying ground, with giant skeletons, was dug up at Mittendorf, in the Austrian Salzkamergut. Many of the bodies were six foot seven inches tall; they were all buried, with the feet to the east, each enclosed in a circle of stones, with a stone under their head. Large earrings and finger rings were found on them, and one skeleton held a knife in its hand. No signs of Christian burials were discovered. mittendorf

Human Giants for Giantologists and Giant Hunters range primarily between 7 to twelve feet. Seven footers are rare 1 out of 2.3 million, while 6 foot seven is rare especially for a group what makes it important is it comes against Cope’s Law/Rule, an evolutionary prediction that is no longer admittedly a law but is still extremely important for the psychology of evolutionism. Man is expected to be the pinnacle of evolution at its greatest height. Facts are we are continually shrinking we can look into the past and see that man was bigger better faster stronger and smarter in the past. This corresponds to every animal as well without exception. So a tribe of ancient people six foot seven is a prediction of greater ancestry of greater humans in the past.