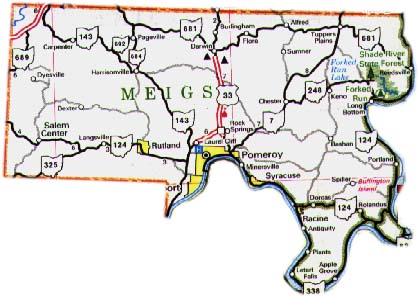 The county is named for Return J. Meigs, Jr., the fourth Governor of Ohio. Coal mining, both strip and underground, has been an important industry in Meigs County since the late 19th century, although mining of all types largely ceased by the 1990s. The effects of mining are still readily seen on the landscape today. Features such as high walls, spoil piles, and irregular topography are still prevalent. Many tributaries in the Leading Creek basin are plagued by acid mine drainage and sedimentation. The Ohio River creates a microclimate in its valley where temperatures tend to be moderated by the river, hence resulting in longer growing seasons compared to the rest of the county. Other microclimates, known as frost hollows or frost pockets, exist throughout the county in small isolated valleys. Nocturnal temperatures are often several degrees colder than the surrounding terrain.

In Rutland, township was a large mound on a hill near the center of section 7. It was twelve feet high and the bones of a very large man were found there.