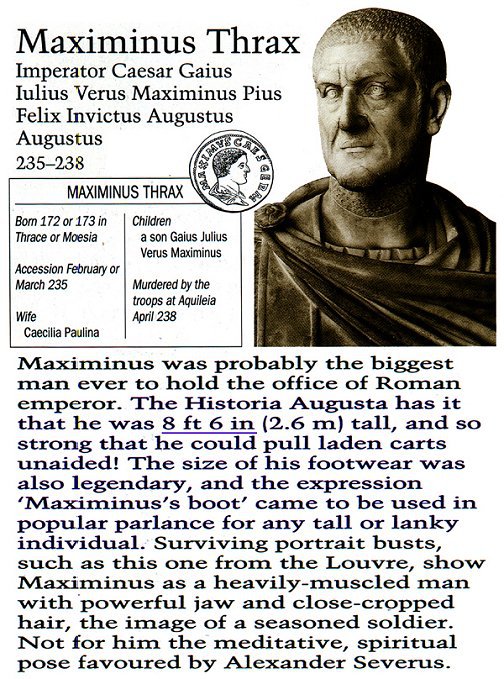 Maximinus Thrax occupies an important – and rather unattractive – place in
the annals of Imperial Roman history. The so-called “Crisis of the Third
Century” began with his reign in 235-238 AD. Though he was not the first
Augustus to owe his position to the favor of his soldiers, he was the first of
the “barracks emperors” whose chronic infighting nearly brought the Empire to
total destruction in the following four decades.

Maximinus’ body
and personality seemed to line up well with his role in history – he was a
remarkably brutish, ugly, and difficult man whose hands were soaked in the blood
of those who had dared cross him. In this post, I plan to give a concise
biography revealing pretty much everything that is known about this short-lived
but crucial figure in the history of the Roman Empire.

The child who
would become Maximinus was born in the Balkans in the late 2nd Century. The date
and place of his birth, and the identity of his parents are shrouded in legend.
Traditionally it has been believed that he was born around 170 AD – meaning he
would’ve been close to 70 when he died. Modern historians are inclined to think
that he was born at least a decade later, probably at some point in the reign of
Commodus (180 – 192 AD).

The identity of his parents is equally
mysterious. Tradition claims that his mother was an Alanian Sarmatian, his
father an illiterate Thracian peasant. Other sources call him a “Goth”, possibly
implying a Getic Dacian.

Even the source of Maximinus’ name remains a
mystery. A man named Gaius Julius Maximinus governed one of the Danube provinces
c. 208 AD; it is possible that our Maximinus received his citizenship from this
governor. Gaius Julius Maximinus was probably from a well-born Gaulish family;
his praenomen and nomen indicate that his ancestors had received citizenship
from Julius Caesar. “Maximinus” means “smallest to biggest”, perhaps implying
that he had risen from the ranks to a position of great power.

The future
emperor Maximinus was physically huge and powerful; the (admittedly, unreliable)
Historiae Augusta claims that he was eight feet tall. His coins depict a
man with a massive head and thick brow and huge, thick nose. Added to this were
cruel, squinty eyes and the close-cropped hair of a professional soldier. Even
if he wasn’t a giant as the HA states, Maximinus was definitely a very big man.
The much more reliable historian Herodianus says that no barbarian warrior or
Greek athlete came close to Maximinus in height or physical
prowess.

Maximinus had a colorful military career that presumably began
as early as the 190s AD. He served in a wing of auxiliary cavalry, and was
distinguished by his courage, his enormous size, his skill as a horseman, and
his ferocious and violent temperament. He appears to have served as a private
trooper in the ranks of the Equites Singulares Augustae in the first
decade of the 3rd Century; this was the Emperor’s personal cavalry bodyguard.
Septimius Severus would have been blissfully unaware that this burly young
Danubian soldier would one day overthrow the Dynasty he had just
established…

By the reign of Elagabalus (218-222 AD), Maximinus was
serving as a tribune in the East, though his precise command is unknown. He had
also married by this time. His wife was Caecilia Paulina, and judging by her
name she was of good Roman ancestry – a polar opposite to her husband. They had
a single child, a son, born in or around 218 AD – he was named Gaius Julius
Verus Maximus. If Maximinus really had been born as early as 170 AD, it is
likely that Caecilia was not his first wife, and that he may have had other
children.

Maximinus began to truly make a name for himself during the
reign of the last Severan, Severus Alexander (222-235 AD). In the late 220s he
was serving as the Dux Ripae of the East, the supreme commander of the Syrian
army and the Euphrates frontier. It is likely that he skirmished with the first
Sassanid Persians to assault the Empire. In 232 he appears to have been
commading the Second Traiana Legion in Egypt.

We next hear of Maximinus
in 235; he was serving as “Prefect of the Recruits” along the Rhine frontier.
Severus Alexander, the cultured and rather timid young emperor, was reluctantly
fighting a war against the Alamanni. The soldiers had little respect for him,
but looked upon Maximinus with almost fatherly affection. A crude,
poor-mannered, mean-spirited provincial, he was one of them!

When
Alexander attempted to bribe the Alamanni to stay on the Germanic side of the
Rhine, the soldiers had had enough. He and his mother were both put to the
sword, and Gaius Julius Verus Maximinus Thrax, Praefectus Tirones, was declared
Imperator and Caesar Augustus by the gathered armies.

Maximinus found
that his popularity was mostly limited to the legions of the Rhine and the
Danube frontiers. The Senate and Rome herself only acknowledged him with great
reluctance, and the senators spoke with open scorn about his provincial origins.
Two rebellions – at least one involving some of the senators – broke out against
Maximinus almost immediately.

Maximinus abandoned the placid Germanic
policies of his predecessor, and pursued the Alamanni deep into Germania,
pillaging and butchering every settlement in his way. While he was fighting in
Germania, however, a senator of consular rank formed a rather devious plot to
leave him stranded on the wrong side of the River by destroying the only
military bridge over the Rhine.

History has only remembered this
senator’s cognomen, Magnus. It is fairly possible that he was the Titus
Pactumeius Magnus who had served as consul in 183 AD. Whoever he was, somebody
snitched on him. Magnus and the centurions who had planned to aid him were all
executed, as were their families, friends, and slaves. Maximinus was a simple
man and would not tolerate intrigue.

Simultaneously, a revolt broke out
in Syria, led by a former governor of Syria named Quartinus. Quartinus was
murdered by an Osrohenian officer in his army named Macedo before Maximinus
could embark to the East to put him down.

Despite the rancid opposition
of the Senate and a number of well-born officers, Maximinus threw himself and
all his resources at the Germanic Wars. The Alamanni were decimated and
Maximinus was awarded the title of Germanicus Maximus. He declared his son
Maximus to be “Prince of the Youth”, and his late wife was hailed as empress.
When and how Caecilia Paulina died is a mystery; contemporary gossip claimed
that Maximinus had cut her to pieces in a fit of barbarian rage.

Having
finished with Germania, Maximinus marched his army to Sirmium in the Danube
region, and waged war on the Sarmatians and Free Dacians. The Danube had never
been a quiet frontier, but it had not seen violence of this magnitude since
Trajan’s Dacian Wars over a century before.

One of the legions that had –
thus far – been loyally fighting alongside Maximinus was the Second Parthica,
garrisoned at Albanum in Italy. Many of these soldiers had wives and lovers, and
children, waiting for them at Albanum, and were missing them fiercely. Since
most of the Praetorians were still in Italy (and had yet to voice their opinion
of Maximinus…), Maximinus relied on the Second Parthica as his bodyguards. He
doubled legionary pay in the fleeting hope that it would raise morale. “Love the
soldiers, damn everyone else”, Severus had said…

Maximinus massacred
several tribes from his HQ’s at Sirmium, winning enough victories to justify
taking the titles Sarmaticus Maximus and Dacicus Maximus. The Senate was not
particularly impressed, however, by this crude soldier-emperor who hadn’t even
bothered to make an appearance in the Mother City. Maximinus wasn’t behaving
like the “First Man” of the Principate, he was behaving like a dictatorial
warlord. It was their first clear taste of what was to come – and they weren’t
enjoying it very much.

Maximinus needed more funds – and quickly. His
wars were expensive, his massive increase of military salaries was even more
expensive. Roman tax-collectors had never been known in the provinces as the
understanding sort, but Maximinus told them to be brutal – murderously so. Tax
collectors called upon soldiers and even hired thugs to enforce their demands on
the population of the Empire. Rich men were charged with ridiculous crimes and
imprisoned, all of their possessions confiscated by the
government.

Unrest broke out across the Empire – but nowhere worse than
Africa, which was incidentally one of the richest provinces. The governor of
Africa, Marcus Antonius Gordianus Romanus, and his son by the same name, led a
revolt in January of 238 AD. They took the titles of Augustus and Caesar,
respectively, and raised an army to enforce their claims to the
purple.

In the meantime, the Senate had also become fed up, and had
chosen two of their number – Decimus Caelius Balbinus and Pupienus Maximus – to
rule as joint Augusti. In January of 238, the Roman Empire had six emperors
(counting Julius Maximus, son and co-emperor of Maximinus), each one of them
minting coins and commanding armies.

Capellianus, the governor of
Numidia, was one of Maximinus’ few loyal supporters in the entire Empire. He
crushed the revolt of the Gordiani in Africa and looted the homes of their
supporters, winning spoils for Maximinus. Maximinus and his lackeys had been
reduced to pillaging the houses of Roman citizens just so the Emperor could keep
his promises to the increasingly demanding army.

Content with
Capellianus’ crushing victory, Maximinus and his son invaded Italy with several
legions – including the increasingly unhappy Second Parthica. They besieged the
first major city of Italy, Aquilea, with gruesome results. In May of 238 they
failed an assault on the city’s imposing walls, at the cost of some hundreds of
lives.

As the soldiers retreated back to their camps around the city,
word came from Rome. The Praetorian Guard – the muscle behind the otherwise
farcical regime of Pupienus and Balbinus – had besieged Albanum. If the soldiers
of the Second Parthica did not rebel against Maximinus, their families would
die.

That afternoon, Maximinus and his son were taking a siesta in their
tent. They awoke to the awful commotion of angry, chanting soldiers and clashing
weapons. Several centurions of the Second Parthica entered the tent, and a few
moments later came out with the severed heads of the emperors in their
hands.

The heads were sent to Rome by cavalry messengers attached to the
Second Parthica. The Praetorians not only broke off their assault on Albanum,
they also killed Balbinus and Pupienus. Marcus Antonius Gordianus Tertius,
grandson of the former governor of Africa, was hailed the new
Emperor.

Maximinus was a short-lived and unloved Roman emperor. His
blood-soaked reign was a chilling prelude of the horrifice violence to come in
the next four decades, violence from which the Empire would never fully recover.
He was the first of the “barracks emperors”.