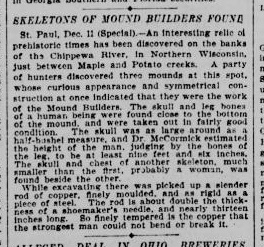 St. Paul, Dec. 11 (Special). – An interesting relic of prehistoric times has been discovered on the banks of the Chippewa River, In Northern Wisconsin, just between Maple and Potato creeks. A party of

hunters discovered three mounds at this spot. Whose curious appearance and symmetrical construction at once indicated that they were the work of the Mound Builders. The skull and leg bones of a human being were found close to the bottom of the mound, and were taken out in fairly good condition. The skull was as large around as a half bushel measure, and Dr. McCormick estimated the height of the man, judging by the bones of the leg, to be at least 9 feet and six inches. The skull and chest of another skeleton, much smaller than the first, probably a woman, was found beside the other.

While excavating there was picked up a slender rod of copper, finely moulded, and as rigid as a piece of steel. The rod is about double the thickness of a shoemaker’s needle, and nearly thirteen inches long. So finely tempered is the copper that the strongest man could not bend or break it.

NINE FEET SIX INCHES is nothing to sneeze at. There isnt one person close, he is a half a foot taller than Robert Wadlow. As far as i can tell Potato Creek is in Rusk county.