Smithsonian Institution to determine age of Skeleton found in Idaho—-

LEWISTON, Idaho. Feb. 16.-(Special.) Bliss Moore, maintenance suberviser of the state highway department, has returned from the Solomon river country, bringing with him the lower jaw and vertabra from a

gigantic human skeleton. The skeleton was discovered on old Freedom creek, in a slide 50 feet below the top of a cliff, by If. S. Vincent and L. J. Tipton of the state highway crews.

Nearly all of the parts of the skeleton have been gathered together and are being taken care of in that country. The lower jaw and the vertabra will be sent to the Smithsonian Institution at Washington, D.C. to ascertain its age and to find out if it has any significance, in the development of the race.

The lower jaw has 10 teeth, one of these being in a state of preservation which indicates that it belongs to a recent date. The upper jaw also has 10 teeth and it appears that this human only had 20 teeth.

The jaws are believed to have been a race of people who were herbivorous. Dr. J. W. Brett, who saw the jaw, said that the normal absorption of the process in which the teeth rests might have caused the jaws to assume their present form succeeding the removal of the back teeth during the life of the person.

Dr. W. P. H. Habel also saw the skeleton and pronounced it to be that of a woman. Dr. W. A. Foskett of the Whitebird country also says it is a woman, probably more than eight feet in height. 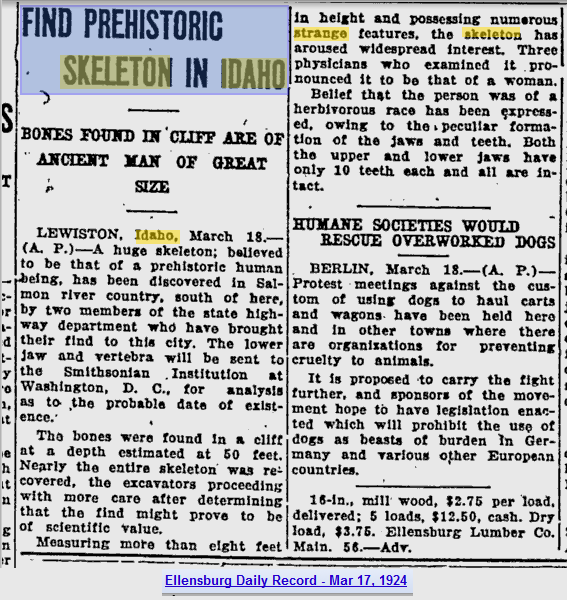