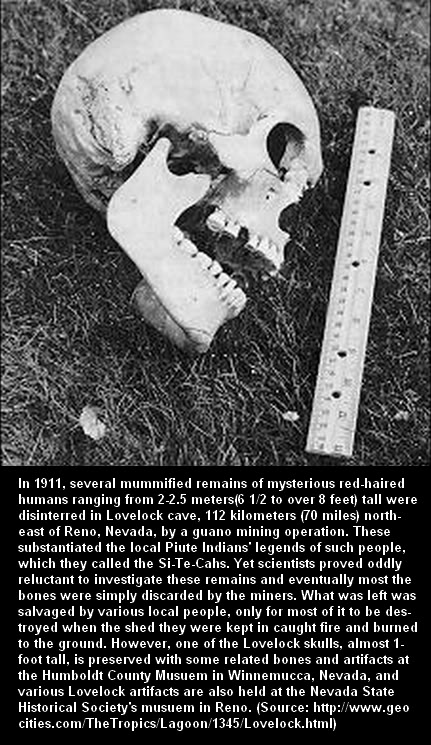 In 1911, several mummified remains of mysterious red-haired humans ranging from 2 – 2.5 meters (6 1/2 to over 8 feet) tall were disinterred in Lovelock cave. 112 kilometers (70 miles) northeast of Reno, Nevada, by a guano mining operation. These substantiated the local Piute Inidians’ legends of such people, which they call the Si-Te-Cahs.  Yet scientists prove oddly reluctant to investigate these remains and eventually most the bones were simply discarded by the miners. What was left was variously salvaged by various local people, only for most of it to be destroyed when the shed they were kept in caught fire and burned to the ground. However, one of the Lovelock skulls, almost 1 foot tall, is preserved with some related bones and artifacts at the Humboldt County Museum in Winnemucca, Nevada, and various Lovelock artifacts are also held at the Nevada State Historical Societies Museum in Reno.

The ANSWER to where are the bones: The Lovelock skulls, these gigantic skulls have not been measured in terms of the cc’s of the outside of the skull. No work like this is being done anywhere. If Greater Ancestors gets the opportunity we plan on measring the cubic capacity of these giants and many more to cross refernce them compared to their weaker descendants.