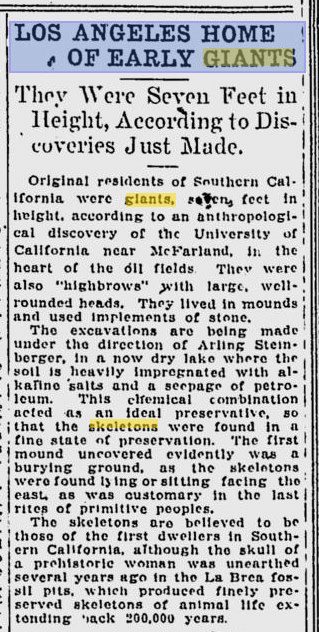 They were Seven Feet in Height, According to Discoveries Just Made.
Original residents of Souther California were giants, seven feet in height, according to an anthropological discovery of the University of California near McFarland in the heart of the oil fields. They were also “highbrows” with large, well-rounded heads. They live in mounds and used implements of stone.
The excavations are being made under the direction of Arling Steinberger, in a now dry lake where the soil is heavily impregnated with alkeline salts and a seepage of of petroleum. This chemical combination acted as an ideal preservative. The first mound uncovered evidently was a burying ground, as the skeletons were found lying or sitting facing the east, as was customary in the last rites of primitive peoples.

The skeletons are believed to be those of the first dwellers in Southern California, although the skull of a prehistoric woman was unearthed several years ago in the LeBrea fossil pits, which produced finely preserved skeletons of animal life extending back 200,000 years.