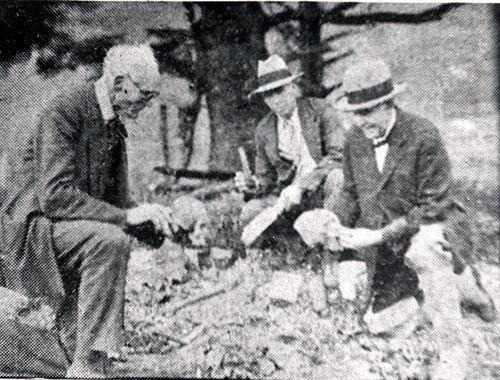 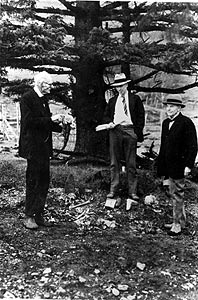 “Thanks to bundles of information from the North Lincoln County Historical Museum, there’s a pretty clear record to this intriguing mystery. According to articles archived by the museum, homesteaders who settled in the Lincoln City and Neskowin area had long heard legends from local tribes about a shipwreck and a mysterious black man briefly worshiped as a god. This was all the way back to the mid 1800’s, and just before the Calkins family started settling into the bay where the Salmon River dumps out to sea next to Cascade Head.

The son of that family, Elmer Calkins, began laying the groundwork for his own homestead near Cascade Head in 1932, according to a 1972 article in the LA Times. As he plowed the ground in preparation for building he ran across something quite unusual: human bones.

Elmer, according to the LA Times article, had grown up with local tribes people all around him and he knew their ways. So what made this find even more striking was that the bones were buried with discarded sea shells. This was, after all, the Indians’ form of a garbage dump. They did not bury their dead in garbage piles. 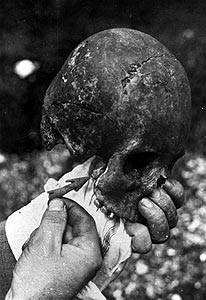 Stranger still, one of the three skeletons was a giant. The man – later discovered to be African – was eight feet tall.

Calkins quickly contacted historian Dr. John Horner and the local coroner, Dr. F. M. Carter. Historical photos from the North Lincoln County Historical Museum show them examining the burial site. Horner took them back to Oregon State University in Corvallis and dated the skeletons at about 160 years, which would have placed them on the central Oregon coast around the late 1700’s.

The other two skeletons were of Caucasian men.

Meanwhile, something immediately clicked with local historians and with Calkins. They had heard many of the tales handed down from generations.

The legend said the crew of the ship wandered off inland after the wreck and were never heard from again. Three stayed behind: two white men and the giant African man.

In the LA Times article, Calkins vividly remembers the tale.

“The Indians worshiped the black giant, so the legend went,” Calkins said at the time. “They were in awe of the man because of his color and his size.”

Then, the natives decided that perhaps this man was not a god, and they turned against him. Children began being born to the women with distinctly African features.

“When the Indians decided the giant was human they killed him and his two shipmates,” Calkins said of the legend.

In a show of contempt, the bodies were thrown into the kitchen middens – the piles of shells from seafood the tribes lived on.

Calkins also noted many of the local tribes’ people he grew up with around the turn of the century had some African features, such as dark, curly hair.

This story is particularly interesting. On one account you have the oral tradition of Native American history, as well as anthropological evidence for the eight foot giant. Although some one might say well we have 8 foot people today, and i would have to agree, however they were indeed more prevalent in the past. 8 foot giants are very common in the past. People are shrinking devolving not evolving and here we have a clear case of the black-lineage and a greater ancestor to that line.