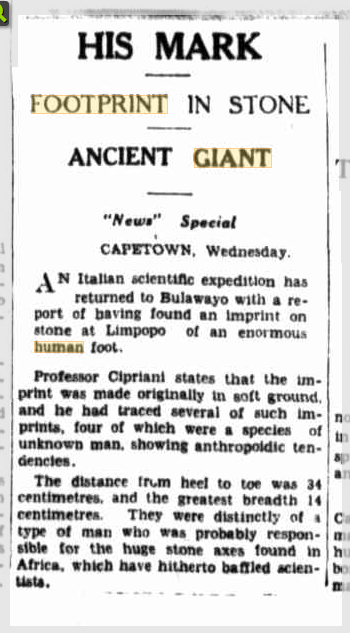 ‘News’ Special CAPETOWN, Wednesday.
An Italian scientific expedition has returned to Bulawayo with a report of having found an Imprint on stone at Limpopo of an enormous human foot.
Professor Cipriani states that the Imprint was made originally to soft ground, and he had traced several or such imprints, four or which were a species of unknown man, showing anthropoidic tendencies.
The distance from heel to toe was 34 centimetres, (13.3858″) and the greatest breadth 14 centimetres. (5.51″) They were distinctly of a type of man who was. probably responsible (or the huge stone axes found In Africa, which have hitherto baffled scientists.
https://trove.nla.gov.au/newspaper/article/119011374?searchTerm=GIANT%20HUMAN%20FOOTPRINT&searchLimits=l-australian=y