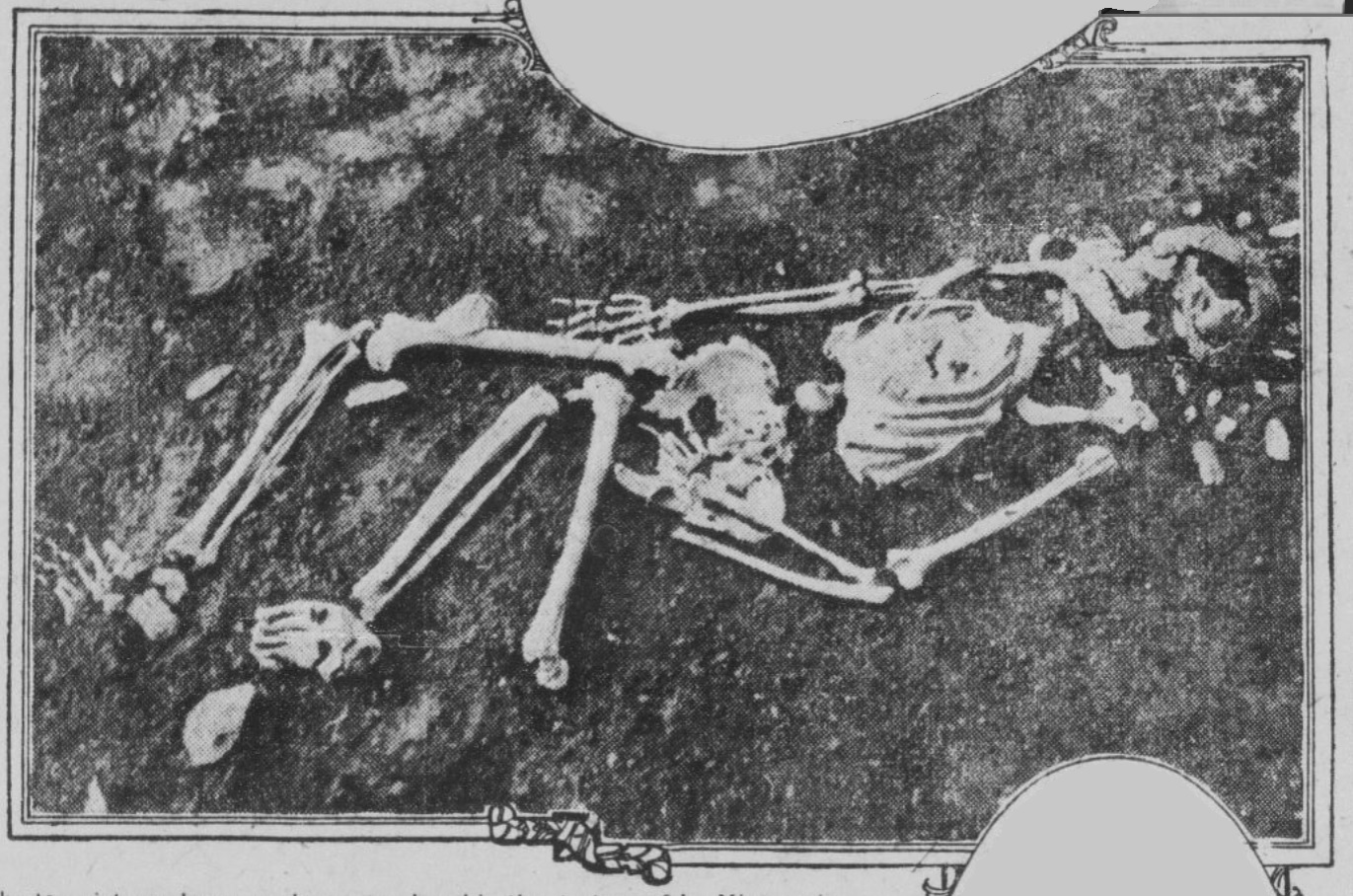 The top picture shows workmen employed in the stratum of La Micogne in
the near vicinity of Les Eyzies, while the center picture shows
the complete skeleton of a huge prehistoric
man found at that place.

When Did Mind Begin? By Garrett P. Serviss

At Least Twice 6,000 Years Ago Man Was Already an Artist and a Mechanic

PROFESHoR ALFRED HER
TIG. Ihe distinguished di
rector of the Peslalozzi insfi-
I ne ip Zurich, opens lip, in The
Cosmopolitan Magazine for July,
one of tiie most wonderful glimpse-‘
Into the beginnings of human his
tory that it is possible to imagine.
We have got past the days when,
misled by a. mistaken chronology
all but a few progressive thinkers
believed that man’s first appear
ance on tills earth was made sud
denly’ 6,000 years ago. Science no
longer refers to Adam, ft lias dis
covered no facts about Adam. But
ii lias discovered an abundance of
facts about men who lived so long
anterior to the traditional time of
Adam that he seems quite a mod
ern instance. Millions of men and
women were dwelling about the
Mediterranean sea. amt in the val
leys of the Nile and the Euphrates,
and developing civilizations which

arouse our admiration, much more
than 6,000 years ago. They were
erecting palaces in Crete perhaps ®
ns long as MOO years ago.
Rut even these people seem mod
ern tn comparison with other early
men that we are beginning to learn
something about. In the sunny land
of southwestern France, as recent
exploration shows, men lived in
large communities at least 12,000
years ago. Yoh may see the illus
trations of Professor Hertig’s ar
ticle, photographs of skulls and
skeletons of some of these people,
and also of Ihe beautiful bone nee
dles, with perfect eyeholes for
thread, which they made, and the
great rocky hill which they turned
into a subterranean city, and the
pictures which they drew’, with ar
tistic skill, on stones and walls, rep
resenting Ihe horses, deer, buffalo,
birds, wild hogs and other ani
mals of their times.
How Many Years?
Taking these together with other
remains of man found elsewhere,
which represent several long stages
of progress, and noting that even
the earliest skulls of men were
plainly superior to those of any
other Animal, one asks himself:
How many tens of thousands of
years must not man have existed,
as a peculiar species, higher than
all others on the earth, and how
far back must wo go in order to
find a type of man not character
ized by an intelligence vastly great
er than that of the brutes?
That man did not begin every
where at the same time in the same
stage of evolution seems clear
enough from the fact that in simi
lar epochs early man showed dif
ferent degrees of devehtpmcnl in
different countries, or in different
parts of the same country. This Is
exactly what we see today. Some
favored parts of the world are now
Inhabited b\ men who have at
tained a marvelous ivillzation,
while other parts are the homes of
men who an- relatively mere sav
ages. Every body knows that man
kind is divisible into a considerable
number of different races, vary ing
in color, in physical make-up. in in
tellectual power, in ideas but no-

body has ever yet been able tn dis
cover the real origin of any’ one of
these races. Their history ante
dates all records. We can mix the
races, mingling their blood and com
pounding their characteristics, for
they are all alike, men and women,
but how did they acquire their dif
ferences to begin with?
The Power There.
Yet, in one respect they arc not
different. They ah possess similar
feelings, similar emotions and sim
ilar minds They all carry’ the
common birthmark of intellect. In
some it Is but little developed, BUT
THE POWER IS THERE, and it is
always at least sufficiently- devel
oped to make its possessors in
comparably’ superior to any other
kind of animal. You can make a
savage comprehend the idea of
justice, but you can not. by’ any
effort make it comprehensible to
a gorilla. It is impossible to find a
tribe of human beings, However low
in the scale of eivilizatiftn, who do
not manifest the common qualities
of humanity, although they may be
distorted, or latent, or covered up.
When and how- did these qualities
originate? /
Think for a moment what those
pictures, drawings, paintings in
ochre, and carvings, found in the
once man-inhabited caves of
France, and made at least 12,000.
and perhaps much more than 12,-
000 years ago, mean. Notwith
standing their lack of artistic skill,
thc.v show, that the artistic instinct
was already alive and In full oper
ation Those early men not only
SAW what the brutes did not see,
but they invented away to REP
RESENT WHAT THEY SAW.
Consider those bone needles, ob
serve how well they are made, and
look particularly at the eye-holes.
It Is a vast, almost immeasurable
chasm that yawns between the
power of thought and of reasoning
tlie making of those holes
implies and the dull instinct of lire
mere animal, w hich never learns Io
do a new thing, but continues, for
thousands of generations, to follow
the same ways pursued by its an
< estors. The first troglodyte who
thought of making a needle and
thread for his wife to make and
mend his garments with was as

groat ail inventor as Edjson -and
even greater, in the sense in which
Archimedes was greater than all
the physicists who have since, with
growing light, improved on his
discoveries.
Suppose we could call back to life
one of those artists who painted
pictures, with powdered ochre,
mixed in his blood, on the walls of
the grotto of the Font de Gaume,
and lead him into the Metropolitan
Museum. Do you think that he
would not recognize what our pic
tures essentially mean, and that if
we put a palette and brushes into
his hands and trained him for a
few years he would not be able to
turn out very good modern pictures
himself?
Not So Out-of■ Date.
Suppose we could revive one of
the mothers of that early race and
put a modern baby in her lap. Do
you think that she would not
quickly show that, she understood
lhe. nature of a child and how io
soothe and care for ii and how to
amuse it? How long do you imag
ine it would he before she could
■wear a hobble skirt and a rowdy
hat as gracefully as any of her
Twentieth Century sisters? She
might even give them lessons in
the art of leading a dog by a ‘–trine
We must learn not to look down
100 contemptuously upon the cavo
dweller of 12,0(10 years ago, for lie
was a great man in his day and Im
worthily upheld the traditions,
whieh-in.-iy already h;»ve been an
cient. of Ihe ‘-uperioriry of the hu
man mind.