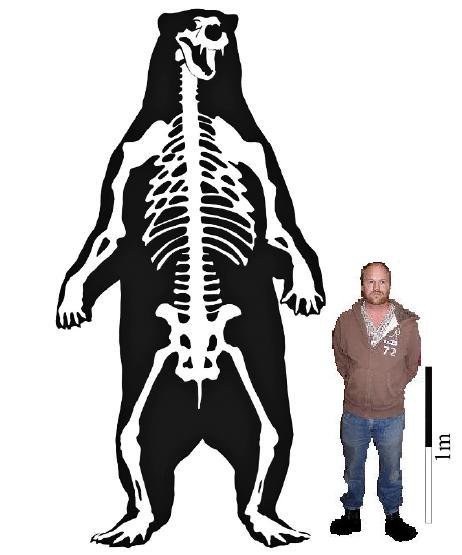 This species is slightly diminutive in size compared to other bears, and is known for being fairly docile and highly vegetarian (one study found that the only 7% of spectacled bear scat sampled contained animal remains, and even those were just beetles and ants; Troya et al. 2004). These tractable traits, however, belie a fearsome family tree.

The spectacled bear is actually the last surviving member of the group known as the short-faced bears–the tremarctines of the genera Arctodus and Arctotherium. The most famous of these is Arctodus simus, known for having been found in great numbers in the La Brea Tar Pits.

Soibelzon and Schubert calculated that this individual had a mass ranging from anywhere between 983 and 2,042 kg (2,167-4,502 lb), depending on which formula is used to make the estimate. So, even using the most conservative formula, we had a bear that literally weighed a ton. For the sake of comparison, grizzlies ( Ursus arctos ) only tend to range up to 600 kg and polar bears ( Ursus maritimus ) up to 800 kg, although the record mass reported for a polar bear is ~1002 kg, on the low end of the estimates for this A. angustidens.

If bears used to attain such gargantuan sizes, and occasionally still do for some outlier individuals, why are the tremarctines now represented solely by the runty spectacled bears, which usually only range between 60 and 175 kg–. . . . .? (devolution)

That phenomenon–the disappearance of the most massive species of a clade and persistence/radiation of smaller species–isn’t solely confined to Arctotherium. It appears that although the Pleistocene saw the development of massive ursids on several continents: Arctotherium in South America, Arctodus in North America, and the European Ursus spelaeus, none seemed to have made it out of the epoch alive. (only smaller) Arctotherium, however, did seem to burn out earlier than the other megabears, . . . .

If large size is so hard to maintain, then why did it develop in the first place?  (Designed large)

Thus, the reign of A. angustidens was spectacular yet brief. As the process of adaptive radiation allowed carnivores to diversify, a more crowded scene began to emerge, resulting in more competition for resources. For example, Finarelli (2007) demonstrated that intraguild dynamics appear to be a factor in taxonomic diversification and the development hypercarnivory within three subfamilies of basal canids. In addition, environmental changes, such as the glacial cycles that punctuated the Pliestocene, could drastically change resource availability before carnivores had the time to adapt to new foraging conditions. (Shrinkage has mostly to do with genetics and not the environment.)

The discovery of this extra-massive A. angustidens individual is important on multiple levels.

It is extremely fascinating to have evidence demonstrating that bears once grew to proportions to which we were previously unaware.

new estimates on the mega bear:

Both were found at the bottom of trap cave 85 feet drop suggesting they hunted in the same territory, hunting Bison over taking it.