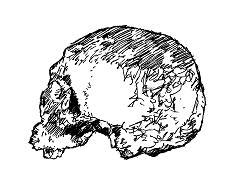 In Branch County Michigan a large skull was unearthed as well as 5 skeletons during 1905-06 by a farmer named Clark Burch. Branch County

The skeletons  were excavated from a large gravel deposit laid down by water.

The remains were photographed, examined thoroughly, and measures by a physician whose records are missing. Branch County

Two skulls were used by dentists and were supposedly destroyed in a fire. they also made clear that the teeth were in good condition.

The missing dentist said that the bones were unusually large compared to today’s people, the farmer that found the skeletons stated that at least one of the skeletons possesses two rows of teeth. Branch County

Many of the finds of large persons from burial mounds are said to possess two and sometimes three rows of teeth.

A Study of the Glacial Kame Culture,in Michigan, Ohio, and Indiana, 1948 by Wilbur M. Cunningham The Burch Site [Michigan]