Discoveries Made by a Princeton College Party in Montana.

BIG TIMBER, MONT.-Wonderful finds of fossils and bones of prehistoric animals are being made in the Fish Creek coun

try by Professor Marcus S. Farr and students from Princeton college. The party is composed, in addition to Professor Farr of C. D. Thompson, Laurence Th

ompson, S. A. Halsey, Gordon Forbes, Walter Kimball. Charles H. Dugro and L. S. Adsitt the start was made from 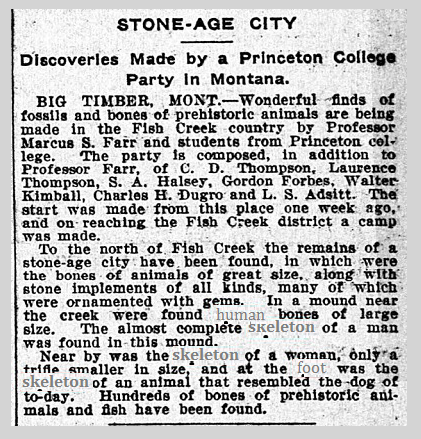 this place one week ago, and on reaching the Fish Creek district a camp was made.

To the North of Fish Creek the remains of a stone age city have been found, in which were the bones of animals of great size, along with stone implements of all kinds, many of which were ornamented with gems. In a mound near the creek were found human bones of large. size. The almost complete skeleton of a man was found in this mound. Nearby was the skeleton of a woman, only a trifle smaller in size and at the foot was a skeleton of an animal that resembled the dog of today. Hundreds of bones of prehistoric animals and fish have been found.

Here in this story you have a skeleton of large-size from a mound. Aew curious factors is that thisarea is known for its dinosaur fossils, so statements like “fossils and bones of prehistoric animals” seems to give the conclusion that the human skeleton was found with dinosaurs. Again with a stone age human city where “the bones of animals of great size.” also alludes to dinosaur and human cohabitation.