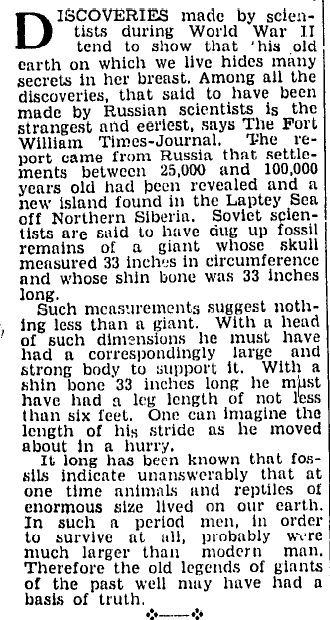 Discoveries made by scientists during World War II tend to show that his old earth on which we live hides many secrets in her breast. Among all the discoveries, that said to have been made by Russian scientists is the strangest and eeriest, says the Fort Williams Times-Journal. The report came from Russia and settlements between 25,000 and 100,000 years old have been revealed and a new island found in the Laptey Sea off Northern Siberia. Soviet scientists are said to have dug up fossil remains of a giant whose shin bone measures 33 inches long he must have had a leg length of 6 feet. One can imagine the length of his stride as he moved about in a hurry.

It long has been known that fossils indicate unanswerably that at one time animals and reptiles of enormous size lived on our earth. In such a period men, in order to survive at all, probably were much larger than modern man. Therefore the old legends of giants of the past well may have had a basis in truth.