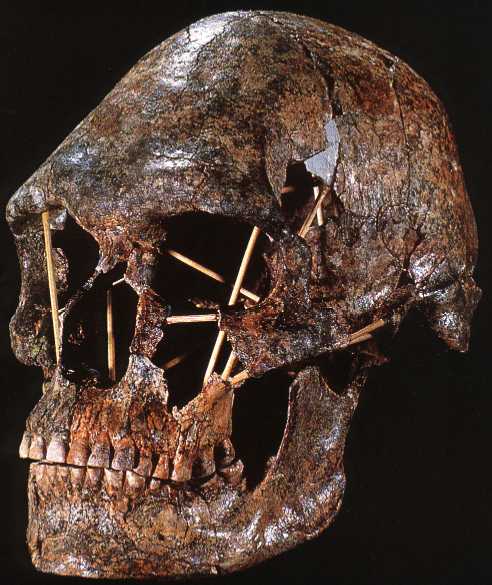 Kow Swamp is an area of Northern Victoria (Australia) where some interesting remains were found. Kow Swamp One  Kow Swamp One

On October 10, 1967 Alan Thorne and Phillip Macumber  discovered the cranium known as “Kow Swamp One”. Kow Swamp One

“Playing the reluctant scientist, Chris Stringer would have you believe he was  “pushed”. But the reality is, he jumped, feet first, into one of the hottest  scientific and cultural debates on the planet: who owns ancient remains? Is it  the world’s museums or the descendants of traditional societies? Kow Swamp One

Stringer, an authority on human origins and noted for his work on the “out of Africa” theory of evolution, jumped in because he believes science is about to be “done over”. The collection he works with – 20,000 specimens stored in London’s Natural History Museum – is, he fears, about to be broken up.”

“What Stringer and others such as Cambridge University’s Robert Foley fear is  that once the skulls, leg bones, hair samples and teeth are gone (including  about 450 Australian specimens), they will be lost to science because they will  be either destroyed, buried or locked away by traditional communities” Kow Swamp One