PETRIFIED, HORNED GIANT IS DUG UP IN TENNESSEE MINE
Knoxville, Tenn. Workmen of the Keene-Strunk Coal company at Helen-wood, Scott county, have found buried in the earth and petrified, a giant six feet four inches tall. About its neck was a beautiful chain. The fingers are perfect with long tapering nails. The hands are folded across the breast. , On each side of its head is a horn, each about four inches in length. Its weight is about 450 pounds. 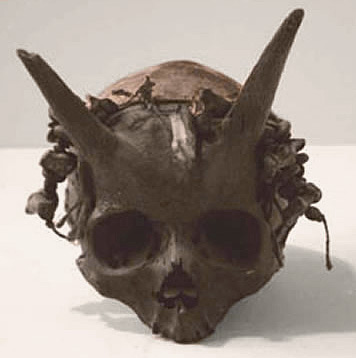 This is NOT the horned giant from Knoxville, but this is one of several that has been found. 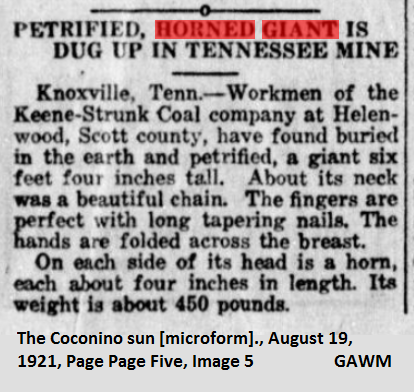 This website presents the articles on giants, and they are endless. We do not claim authenticity for everyone, so if one falls, (especially one that hardly qualifies as a giant, (6’4″) it hardly matters. We present the article as is, in hopes that someone will do the follow up with more research. We also like it when people follow up with new leads and more articles, and especially the location of the artifacts whether true or false. Even those “Crusaders for Government Education” who are opposed to Independent research come through, albeit with ill intentions and accompanying their condescending tones. We like followups, keep them coming. 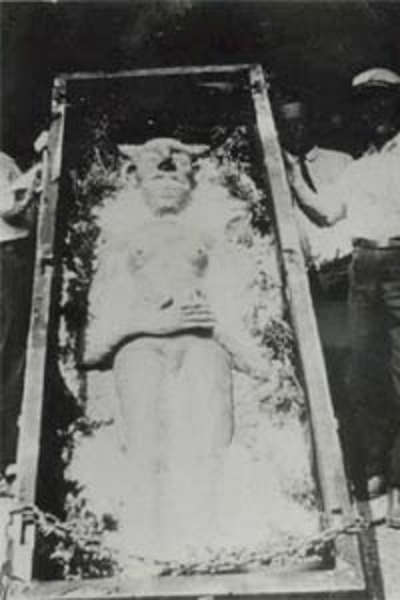 “A man named Mr. Cruis Sexton. Sexton, began his work. He built the “Devil” out of bed clay, which was near seams of coal. The mine that he chose to work in was an abandoned and dark place. There, he spent days trying to get each detail perfect. He finally finished the statue, which was larger than the average size man and weighed over a ton.

The “Devil’s” features were so life-like, there was also great detail in the chest area. The muscles of the arms were outlined, and the genitals were vaguely present.

His, word began to spread.

Sexton then transferred the “Devil” to the home of his relative Jerry Smith. Smith lived close to the railroad in Helenwood.

As the trains began to come in more frequently, word began to spread like a wild fire about the “Devil of Scott County.” This tale went all the way through railroad communities, which stretched from Cincinnati to Florida. This was a long way for one small tale to travel. However, as it traveled, the story became bigger and bigger. Soon people were wanting to see the “Devil” for themselves.

Sexton and Smith decided to set up the “Devil” at the railroad station in Helenwood. People from all around the country would stop at Helenwood to view the gigantic statue. They would pay twenty-five cents for a twenty minute view of the creature, which was now laid inside of a massive coffin.

Some speculate that the “Devil” may be found in a museum toward the Northern part of the United States. Others believe that his body disintegrated into nothingness.

Even though the “Devil” may have been just a statue, it still left its mark upon the people of Scott County. This was one of the most famous tales from Helenwood.” Leshia Byrge 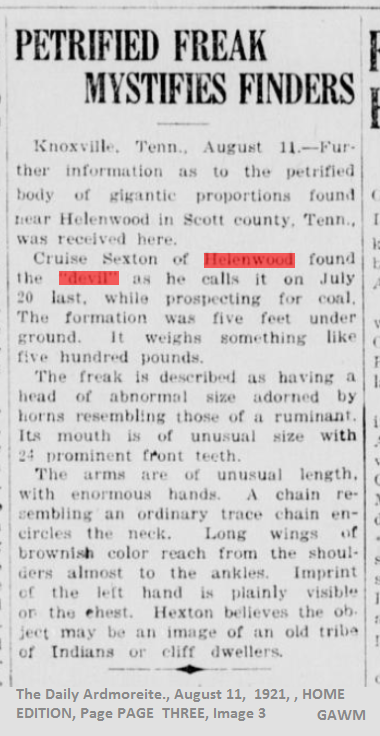 These articles  report the finds of giants, not to back every claim, a giant of 6’4 means nothing when 9 footers in the past come a dime a dozen. Straw-man attacks from people that believe we came from monkeys can not be taken seriously. If that is what academic scholarship requires, rational thinking men must tread a different path.

Not every lead out of thousands is solid, but you can expect the weakest to be culled from the herd, by even the weakest of foxes. This is good for Greater Ancestry, the greatest scientific model available.

We call this culling, quality control. Thanks for doing field agent work. We would like follow ups for all of these articles.

There are a lot more articles to come.