Knee screw thought to be modern 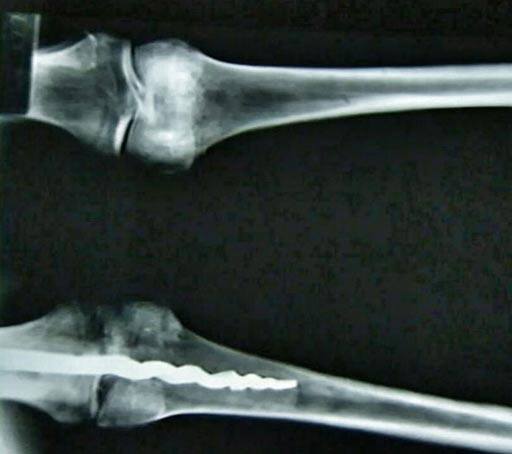 In 1971, the Rosicrucian Museum in California acquired a sealed ancient Egyptian coffin containing the well-preserved mummy of a high status Egyptian male. More than two decades later, a team of scientists made a shocking discovery – the mummy displayed evidence of an advanced surgical procedure carried out nearly 2,600 years ago. Inside the mummy’s left knee was a 9-inch metal orthopaedic pin that had been inserted with such advanced biomechanical principles, that initially scientists could not distinguish it from a modern-day procedure.

In order to investigate the nature of the implant, Griggs, Dr. Richard T. Jackson, an orthopaedic surgeon from Provo, and Dr. E. Bruce McIiff, chief of radiology for Utah Valley Regional Medical Center, carefully drilled into the bone to allow access for a tiny camera to examine the pin, and to extract samples of the bone and the metal.

The scientific team found traces of ancient organic resin, similar to modern bone cement, as well as traces of ancient fats and textiles still held firmly in place. Extensive investigations revealed that the advanced procedure had been carried out in ancient times, approximately 2,600 years ago.

The research team were astounded that the pin had been created with the same designs used today to create bone stabilization.

“We are amazed at the ability to create a pin with biomechanical principles that we still use today—rigid fixation of the bone, for example,” said Dr. Richard Jackson.

“It is beyond anything we anticipated for that time.”

BYU reports that the pin “tapers into a corkscrew as it enters the femur, or thigh bone, similar to biomechanical methods currently used. The other end of the pin, which is positioned in the tibia, or shin bone, has three flanges extending outward from the core of the pin that prevent rotation of the pin inside the bone.”
Read more: http://www.ancient-origins.net/artifacts-ancient-technology/medical-mystery-usermontu-why-discovery-2600-year-old-knee-screw-020445#ixzz3oZtnZv2d
Source: Snow, K. ‘BYU Professor finds evidence of advanced surgery in ancient mummy’. </a><a>Brigham Young University</a>.Featured image: The mummified remains of Usermontu, Rosicrucian San Jose Museum (Wikimedia Commons). Inset: Metal pin found in the knee of Usermontu. Credit: Professor Griggs, Brigham Young University.