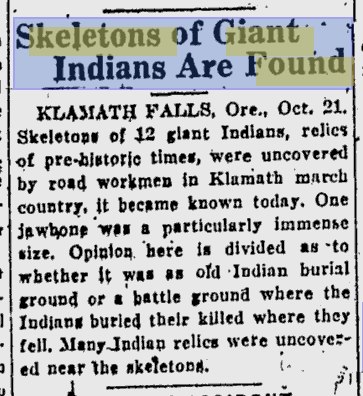 Klamath Falls, Ore., Oct. 21. Skeletons of 12 giant Indians, relics of pre-historic times, were uncovered by road workmen in Klamath march country, it became known today. One jawbone was particularly immense size. Opinion here is divided as to whether it was an old Indian burial ground where the Indians buried their killed where they fell. Many Indian relics were uncovered near the skeletons. Klamath Falls

“One jawbone was particularly immense in size”, there are a lot of adjectives that could have been used, but the word “immense” is particularly descriptive.  The Turkish jawbone which you can see a replica of at the “Greater Ancestors World Museum” in Jacksonville Florida is 6 1/2 inches across, while i have read of jaw bones found that were 8 1/2 inches from tmj to tmj. Now that is immense, its a shame we don’t have measurements for this one.