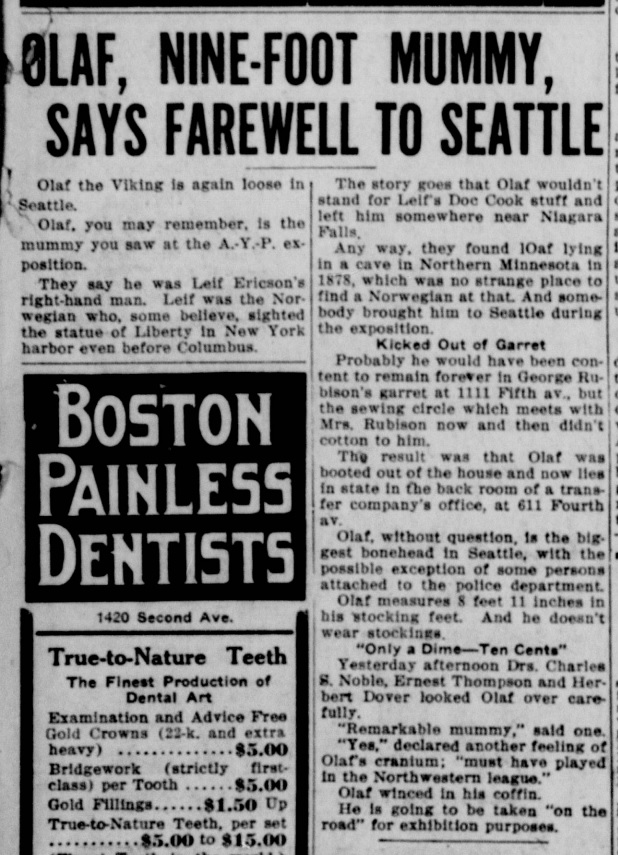 Olaf the Viking is again loose in Seattle.
Olaf, you may remember is the mummy you saw at the A. Y. P. exposition.

They say he was Leif Ericson’s right hand man. Leif was the Norweigian who, some believe sighted the statue of liberty in New York Harbor before Columbus.

The story goes that Olaf wouldn’t 1 stand for Leif’s Doc Cook stuff and left him somewhere near Niagara Falls. Any way, they found Olaf lying in a cave In Northern Minnesota in 1878, which was no strange place to find a Norwegian at that. And some body brought him to Seattle during the exposition.

Kicked Out of Garret
Probably he would have been content to remain forever In George Rubison’s garret at 1111 Fifth av., but the sowing circle which meets with Mrs, Rubison now and then didn’t cotton to him.
The result was that Olaf was booted out of the house and now lies in state in the back room of a trans I fer company’s office, at 611 Fourth av.

Olaf. without question. Is the biggest bonehead In Seattle, with the possible exception of some personal attached to the police department. Olaf measures 8 feot 11 Inches In his Stocking feet. And he doesn’t wear stockings .

Yesterday afternoon Mrs CharleS S. Noble, Ernest Thompson and Herbert Dover looked Olaf over care fully.
“Remarkable mummy,” said one. “Yes.” declared another feeling of Olaf’s cranium: “must have played In the Northwestern league.” Olaf winced in his coffin- He Is going to be taken “on the road” for exhibition purposes. ​Tracking Olaf, … I found this link where the display for Olaf but not the mummy itself was sold. 3k to buy the signs and statue.