I also found out this: Kap Dwa, the Two-Headed Patagonian Giant. Over 12 feet tall, he was captured by Spanish sailors in 1673. After he’d killed four of them, his captors plunged a boarding pike through his heart. His stuffed body has been on display in English sideshows since 1900 and in America since 1980. — Fortean Times . 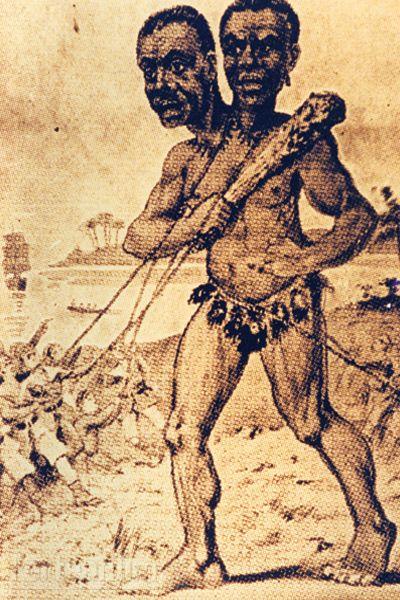 And here’s more info:
“The Two-Headed Patagonian Giant” was over 12ft (3.7m) tall, was a famous fairground attraction brought to England in the 19 century. He had been captured by the Spanish sailors in 1673 and bound to the mainmast. He broke loose and killed four of his captors, before being killed himself by a boarding pike plunged into his heart.

In the early 1900’s, the stuffed giant was purchased by Mr. Bartram who toured the country on the Edwardian horror circuit, ending up in Weston-super-mare in Somerset, where the curiosity passed through several hands and exhibited at various locations. It was known as Kap Dwa, which translates approximately as Two-Heads.(In the Maylay language, kepala means head and dua means two; how this relates to the Patagonian provenance is unknown.) In 1914, visitors to Weston’s Birnbeck Pier paid tuppence to see the black giant lying on his back wearing a loincloth, armed with large club and a snake coiled on his breast. The exhibit is mentioned in an Innkeeper’s Diary(1931) by John Fothergill, and in Cider With Rosie (1959) by Laurie Lee. It was sold to a showman called “Lord” Thomas Howard in 1959, after which it left Weston.

Frank Adey remembers seeing it in Blackpool around 1960. “There were nosing’s of sutures or other ‘joins’, even though the body was largely unclothed”. In the 1930s, two doctors and a radiologist inspected it in Weston and found “no perceptual evidence of it being a fake”. They speculated that it was some kind of conjoined twin. It was again on display in Blackpool at the end of 1960. One account maintains that in 1974 Howard sold or transferred Kap Dwa to his brother Scott in New Jersey.

A two-headed giant in a glass case with a coiled snake and a club was seen at a traveling funfair in MANCHESTER IN NOVEMBER 1998. Ian Simmons then asked “Professor Stomboll” about Kap D. Stomboll, one of the last of the British freak show showman Billy Hill had bought the giant from Howard in Blackpool and, though semi-retired, still toured in his white bus with an assortment of attractions-including the two-headed boy, “the smallest woman that ever lived”, a six-legged lamb, and a three-eyed fox. Last heard, he exhibited Kap Dwa in Newcastle in September 1999. 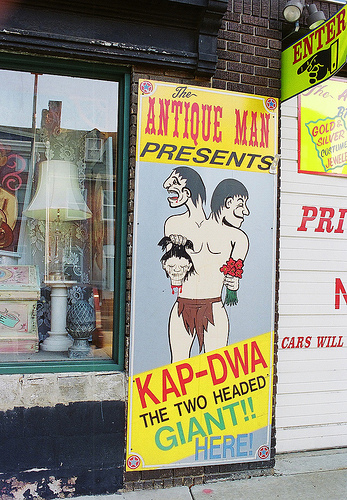 Mr. Horn in Baltimore has tracked the dubious relic this year in a Baltimore antique shop called Antique Man 1.