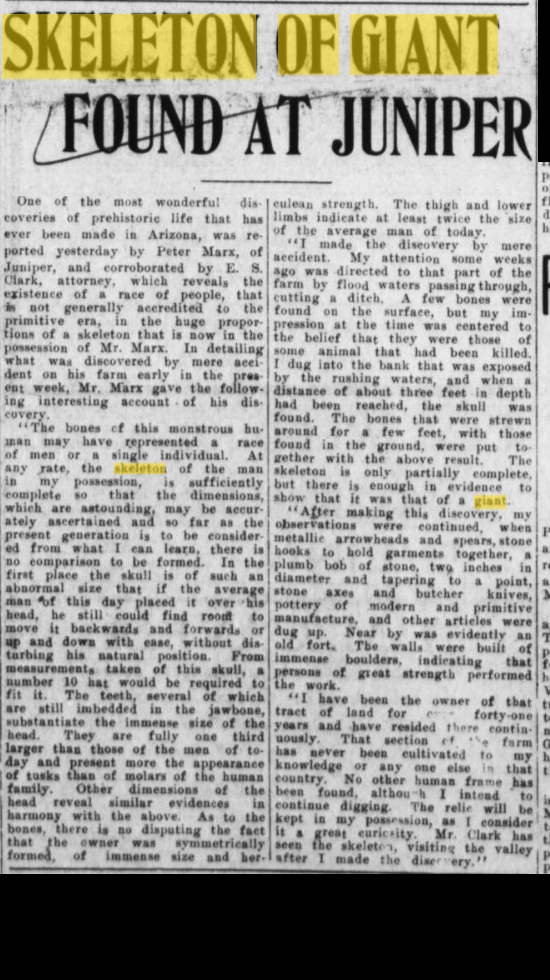 “One of the most wonderful discoveries of prehistoric life that has ever been made in Arizona, was reported yesterday by Peter Marx, of Juniper, and corroborated by E. S. Clark, attorney, which reveals the existence of a race of people, that is not generally accredited to the primitive era, in the huge proportions of a skeleton that is now in the possession of Mr. Marx. In detailing what was discovered by mere accident on his farm early in the present week, Mr. Marx gave the following interesting account of his discovery. “The bones of this monstrous human may have represented a race of men or a single individual. At any rate, the skeleton of the man in my possession, is sufficiently complete  so that the dimensions, which are astounding, may be accurately ascertained and so far as the present generation is to be considered from what I can learn, there is no comparison to be formed. In the first place the skull is of such an abnormal size that if the average man of this day placed it over his head, he still would find room to move it backwards and forwards and up and down with ease, without disturbing his natural position. From measurements taken of this skull, a number 10 hat would be required to fit it. The teeth, several of which are still imbedded in the jawbone, substantiate the immense size of the head. They are fully one third larger than those of the men of today and present more of the appearance of tusks than of molars in the human family.

Other dimensions of the head reveal similar evidences is harmony with the above. As to the bones, there is no disputing the fact that the owner was symmetrically formed, of immense size and herculean strength. The thigh and lower limbs indicate at least twice the size of the average man today.