A MOUND WITH GIANT BONES REMAINING

The Hodgen’s Cemetery Mound is a Native American mound in the far eastern part of the U.S. state of Ohio. Located in the village of Tiltonsville along the Ohio River shoreline of Jefferson County,

During the nineteenth century, white residents of the village of Tiltonsville founded a cemetery around a small hill on the northern side of their village. A round, cone-shaped knoll with a tree growing from its top, the hill is surrounded by gravestones as old as the 1870s. 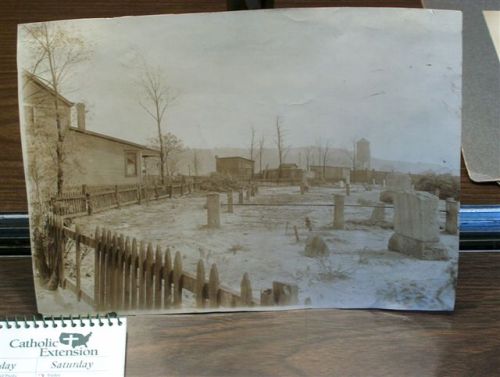 The picture if a photo of the Mound Cemetery taken in 1920. It shows the eastern section of the James Hodgens plot surrounded by iron pipes. The house on the left was occupied by the Billingsly family for many years, and the picket fence has been replaced by a well-worn chain-lock fence. 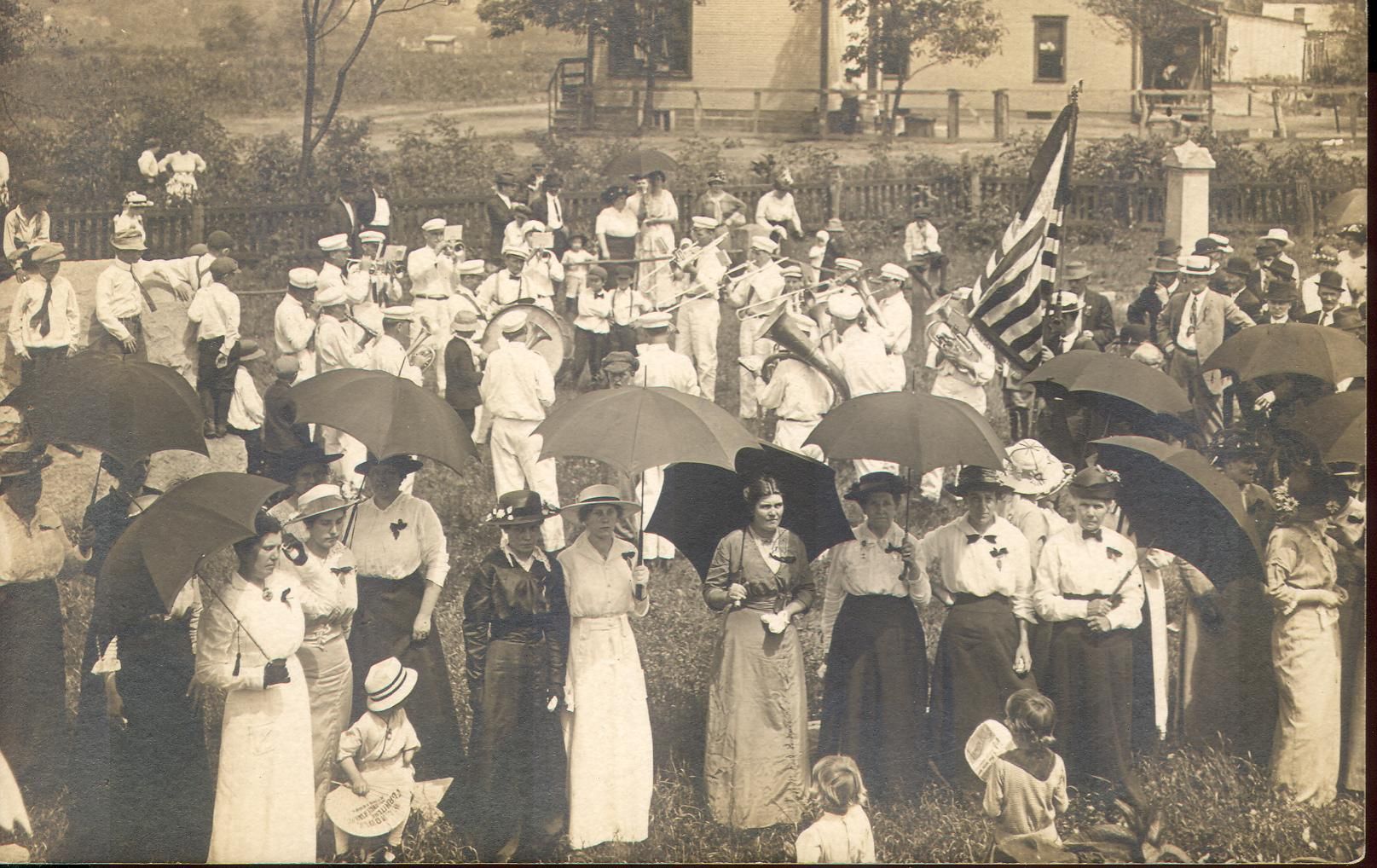 At some point since that time, erosion of the hillside revealed human bones, including a skull with evidence of artificial cranial deformation.

This practice was common among the prehistoric Adena culture; consequently, the bones allowed archaeologists to determine that the hill was a burial mound built by the Adena, who are believed to have inhabited the area at some point between 500 BC and AD 500. 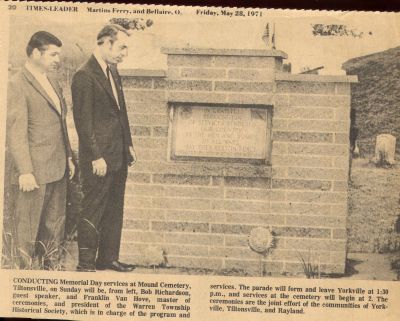 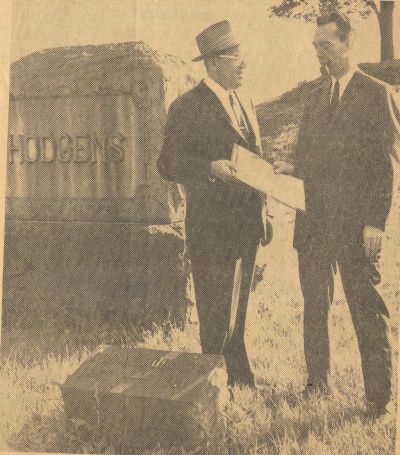 In their report on the Dover mound in Kentucky, Webb and Snow noted that the Adena crania to represent the “highest skull vaults reported anywhere in the world” (Webb and Snow, The Dover Mound

William S Webb and Charles Snow devoted considerable space to analysis of the large, high-vaulted crania of the Adena people of North America:

“The forehead is typically a prominent one, bordered below by fairly sizeable brow      ridges. The root of the nose is of average proportions and continues on to a pro

t convex bridge that is one of the prominent features of the face. The characteristic bulge of the upper and lower jaws (alveolar prognathism) is moderate in projection…Usually the cheek bones are not only of large size in themselves but they have a forward and lateral prominence…”2 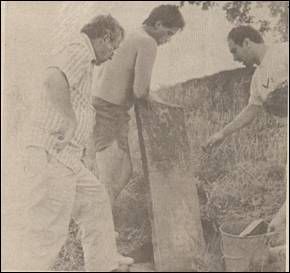 Snow felt that these traits, along with the “great width of the bony chin” distinguished Adena from their predecessors and contemporaries.

The Adena practiced artificial deformation of the occipital region, enhancing their large congenital features. Webb an

d Snow noted that Adena skulls were “the highest known in the world”2 with an average index of 89.5, while the deformed skulls reached as high as 100a2.

The characteristics of the Beaker People are virtually identical to Adena. Carlton Stephen Coons:

“Where Bell Beaker burials are found in central Europe, the skeletons are almost always of the same tall brachycephalic type…”

Here you can see that the elongated skeletons are tall and

the skulls are Brachycephalic.

Burkett described “large teeth” in the “powerful” lower jaws of the Adena.

Although the Hodgen’s Cemetery Mound has never been excavated, it is a significant archaeological site — disproportionately large numbers of Adena burials with cranial deformation were societal élites who were typically buried with significant grave goods, and 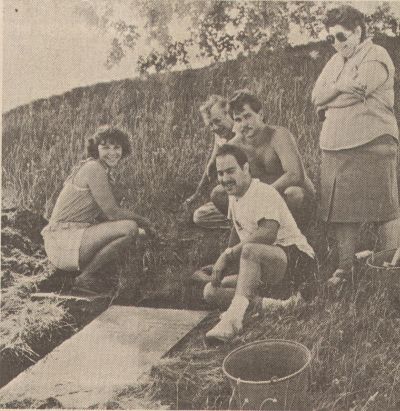 remain in their place.

The mound has been disturbed by the digging of modern graves into its southwestern side, but the graves have not deformed the mound’s general conical shape significantly.

In 1975, the Hodgen’s Cemetery Mound was listed on the National Register of Historic Places, qualifying because of its archaeological value in the local area. It is one of two Jefferson County archaeological sites on the Register, along with the Speedway Mound in nearby Rayland.

Photo above is of the Mound Cemetery,
Tiltonsville, Warren Township,
Jefferson County, and was taken prior to
November 1, 1959 when it appeared on
page 13 of Wheeling Times-Leader
Newspaper

The picture if a photo of the Mound Cemetery taken in 1920. It shows the eastern section of the James Hodgens plot surrounded by iron pipes.
The house on the left was occupied by the Billingsly family for many years, and the picket fence has been replaced by a well-worn chain-lock fence.

The picture if a photo of the Mound Cemetery taken in 1920. It shows the eastern section of the James Hodgens plot surrounded by iron pipes.
The house on the left was occupied by the Billingsly family for many years, and the picket fence has been replaced by a well-worn chain-lock fence.

There are no reports of Giants from this mound. However, the Giant Adena culture have been proven over and over to be the quintessential known giant mound-builder race. The skull found there belonged to an Adena (a giant) while the skeleton was not excavated. When someone asks “where are the bones?” my reply is fortunately, “some still in the ground.” Here are the bones! Hopefully one day the mound can be excavated without the presence of the Smithsonian. Most important is that this location, these pics are not empty, the bones still reside there.