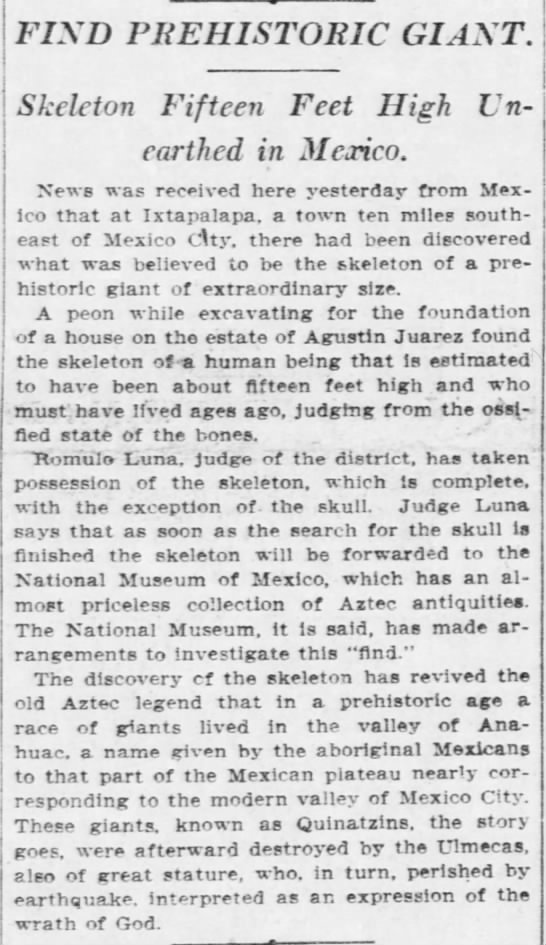 News was received here yesterday from Mexico that at Ixtapalapa. a town ten mllep southeast of Mexico dhy. there had been discovered what was believed to be the skeleton of a prehistoric giant &lt;&lt;T extraordinary size. A peon while excavating for the foundation of a house on the estate of Agustin Juarez found the skeleton oft human being that is estimated to have been about fifteen feet high and who must have lived ages ago, judgrng from the ossified state of the bones. “Romultt Luna. Judg-e of the district, has taken possession of the skeleton, which is complete, with the exception of the Fkull. Judge Luna says that as soon as the search for the skull Is finished the skeleton will be forward-rd to the National Museum of Mexico, which has an almost prtostess collection of Aztec antiquities. The National Museum, it is said, has made arrancements to investigate this “find.” The discovery cf the skeleton has revived the old Aztec legend that in a prehistoric age a race of giants lived in the vallay of Anahuac. a name eiven by the aboriginal Mexicans to that part of the Mexican piateau nearly corresponding to the modern valley of Mexico City. These giants, known as Quinatzins. the stor&gt; pnpf, were afterward destroyed by the T_”‘.me&lt;-as. also of ereat stature, who. in turn, perished by earthquake. Interpreted as ar. expression of the wrath of God. BEQUEATHED

This article comes from Giant Researcher Chad Riley, and was first posted to Real Giants.