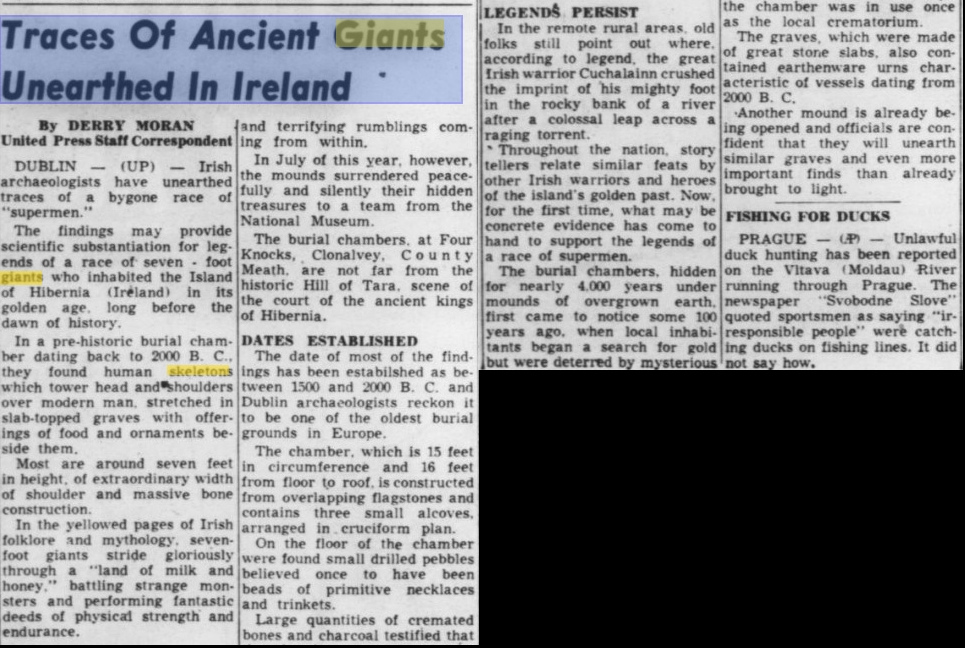 DUBLIN _ (UP) _ Irish archaeologists have unearthed traces of a bygone race of “supermen.” Hibernia

The findings may provide scientific substantiation for legends of a race of seven – foot giants who inhabited the island of Hibernia (Ireland) in its golden age, long before the dawn of history. Hibernia

In a prehistoric burial chamber dating back to 2000 BC, they found human skeletons which towers head and shoulders over modern man stretched in slab-topped graves with offerings of food and ornaments beside them.

Most are around seven feet in height, of extraordinary width of shoulder and massive bone construction.

In the yellow pages of Irish folklore and mythology, seven foot giants stride gloriously through a “land of milk and honey,” battling strange monsters and performing fantastic deeds of physical strength and endurance.

In the remote rural areas, old folks still point out where, according to legend, the great Irish Warrior Cushalainn crushed the imprint of his mighty foot in the rocky bank of the river after a colossal leap across the raging torrent.

Throughout the nation, story tellers relate similar feats by other Irish warriors and heroes of the island’s golden past. Now, for the first time, what may be concrete evidence has come to hand to support the legends of a race of supermen.

The burial chambers hidden for nearly 4,000 years under mounds of overgrown earth. first came to notice some 100 years ago, when local inhabitants began to search for gold but where deterred by mysterious and terrifying rumblins coming from within.

In July of this year. however, the mounds surrendered peacefully and silently their hidden reassures to a team from the National Museum.

The burial chambers, at Four knocks, Clonalvey, County Meath, are not far from the historic Hill of Tara, scene of the court of the ancient kings of Hibernia.

The date of most of the findings has been established as between 1500 and 2000 BC and Dublin archaeologists reckon it to be one of the oldest burial grounds in Europe.

The chamber, which is 15 feet in circumference and 16 feet from floor to roof, is constructed from overlapping flagstones and contains three small alcoves, arranged in cruciform plan.

On the floor of the chamber were found small drilled pebbles  believed once to have been beads of primitive necklaces and trinkets.

Large quantities of cremated bones and charcoal testified that the chamber was in use once as the local crematorium.

The graves which were made of great stone slabs, also contained earthenware urns characteristic of vessels dating from 2000 BC.

Another mound is already being opened and officials are confident that they will unearth similar graves and even more important finds than already brought to light.