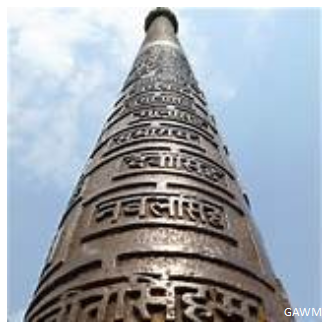 The iron pillar, located  in Delhi and India, continues to confound tourists, puzzled at how such a piece of ancient craftsmanship has stayed rust-free. It is said to have been built during the golden Gupta dynasty.

and is the biggest hand-forged block of iron from antiquity.

It is a demonstration of the high degree of accomplishment in the art of iron making by ancient Indian iron and steel makers.

It has been said that the Indians were the only non-European people who manufactured heavy forged pieces of iron and the pieces were of the size that the European smiths did not learn to make more than one thousand years later.

The pillar is said that it is about 2300 years old. It stands about 6.7 meter high – the portion below the ground being only about 0.5 meter. Its diameter varies from 4 cm at the top to 42 cm at the bottom. Digging in the year 1871 revealed a bulb-shaped bottom, much like an onion, with eight short thick rods attached to it. The weight of the pillar is about 6.5 tons.

The pillar is rough within a few hundred centimeters of the ground and is smooth and highly polished at eye level.  The upper part of the column is so highly finished that it is sometimes mistaken as bronze, the bronze color may have been due to embedded sand or to a thin ‘bloom’ of ferric oxide viewed at an oblique angle.

The fact that it has withstood corrosion is remarkable when one compares with the iron beams used in temples of Puri and Konark which have undergone high degree of rusting even though they are only about 700 years old.

Processing technique might have been different, but it is almost certain that either Pancake forging or Forge Welding technique was used in various forms for the pillars like that of Delhi (comparable ones being found in Dhar in Madhya Pradesh and Kodachari in Karnataka), the length would have been vertically increased by raising the earthen platform around and constructing an extraction furnace of mud on top of the top end. The extracted sponge was probably hammered on in order to weld with the top, while heating was continued. Another procedure suggested is heating of the blooms in liquid lead metal followed by forge welding. But it is difficult to conceive how such a large mass could have been subjected to treatment of this type at that time.

The analysis of the iron varies with the source of the samples. Examination of the unetched section of the iron reveals slag particles distributed irregularly. Small particles are also present.

In etched condition polyhedral grains of ferrite with some slip bands in a few grains near the surface are reported.

Some ferrite grains have a small amount of pearlite at the grain boundaries. Surface is almost free from pearlite.

Many theories have been put forward from time to time to explain the rust-free state of the pillar. For example, the site of the pillar is away from industrial areas and the climate of Delhi is fairly dry. It is known that serious corrosion of iron does not take place if critical value of relative humidity is less than 80%. At Delhi, the relative humidity exceeds 80% for only about 20 days in a year and exceeds 70% for only about 65 days in a year. Therefore, although the total rainfall annually is about 15-30 inches the atmosphere in Delhi is not very conducive to rusting of iron.

Besides a dry environment, there appears to be no doubt that the protective scale on the pillar has played a major role in protecting this monument. There are two major theories of formation of this protective scale. It is quite possible that both the factors have played equally important roles in formation of this scale. The great mass of metal might act as a temperature stabilizer, thus reducing condensation of moisture on it. It has already been mentioned that corrosion proceeds during those time when the effective relative humidity on the surface of the metal exceeds the critical value (e.g. 80%). In Delhi, this cannot normally occur during the day or early in the night because the air is very dry, except of course when it rains. During the remainder of the night the temperature slowly drops and because of its high heat capacity, the pillar remains warm and less liable to corrode than the relative humidity of the air would indicate. Just before day break the pillar is for a very short time cooler than air as dry, daytime conditions are quickly reestablished.

So, in brief, it can be concluded that the corrosion resistance property of the Delhi Pillar is due to: (i) the purity of its iron; (ii) high phosphorus; (iii) low sulphur; (iv) absence of any other metal; (v) cinder coating formed on the surface; (vi) better forge welding; (vii) drier and uncontaminated atmospheric condition; and (viii) mass metal effect.