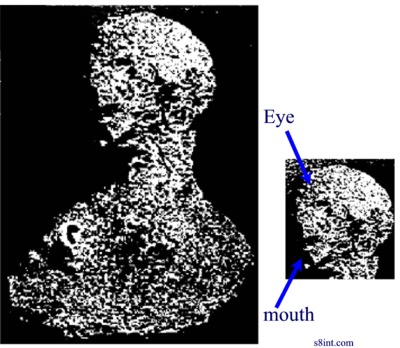 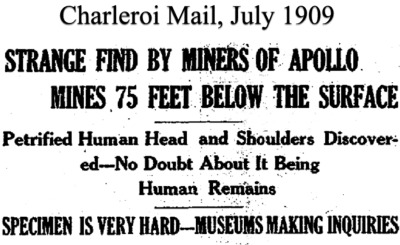 “Appearing in the Newspaper “Charleroi Mail”, July 1909 edition, was a news report of a petrified giant whom the finders considered to be absolutely human. The problem is that according to evolution, no human should be found at such a depth as it would indicate the person to be millions of years old. According to the Bible, there were giants on the earth before the days of the flood and hence finding a giant so far below the ground only serves to confirm the veracity of the Bible and the flood. “75 Feet Below the Surface – Petrified Human Head and Shoulders Discovered – No Doubt About it Being Human Remains – Museums Making Inquiries Specimen is Very Hard.”

Over the years, science has responded to the numerous claims of giant human petrified remains or even regular sized, petrified human remains by claiming that the human body does not petrify. This is despite the numerous photos and claims by other scientists that they did in fact occur and did in fact exist.

One of the main reasons for this scientific obstinacy is that the petrification process in the wild is supposed to take millions of years, while humans, according to evolutionary �science� have only been around for half that time.

From the article: �Science has a problem in the discovery at Fayette City of the supposed petrified head and shoulders of a human being at the depth of 75 feet below the surface and two miles beyond the entrance to the Apollo mines.�

The specimen was on display at the office of the editor of the Fayette Journal and was thought to be headed eventually to the Carnegie Museum.

Petrification of a human body is one problem for science. Finding this evidence at the depth it was found is another. Both of those problems pale in the face of this next quote from the article.

�The bust was dug from a vein of coal, thrown on the mine-car along with coal, the workmen being unaware that the heavy object was a portion of a human being�.

One view of the petrified head and shoulders of a robust human being found in a coal vein in the Apollo Mines in 1909.

This would mean according to evolutionary science and time scale, that this human lived from millions to several billon years before the dinosaurs themselves evolved! There is no way to simultaneously believe that this coalified, petrified, human head and torso actually exists and to believe in the evolutionary timescale.

Consequently, no evolutionary scientist can accept that this man�s remains were found where and how they were reported to have been found. Better to believe that it is another incredible imitation by nature.

There are several strata of rock and shale between the remains and the coal vein, making it impossible for the head and shoulders to have worked its way down; it was reported as a way to counteract any arguments to the contrary.

�On one side, the bone of the arm shows, it not being subjected to the crushing pressure that the rest of the body sustained�. The bone shows plainly..”