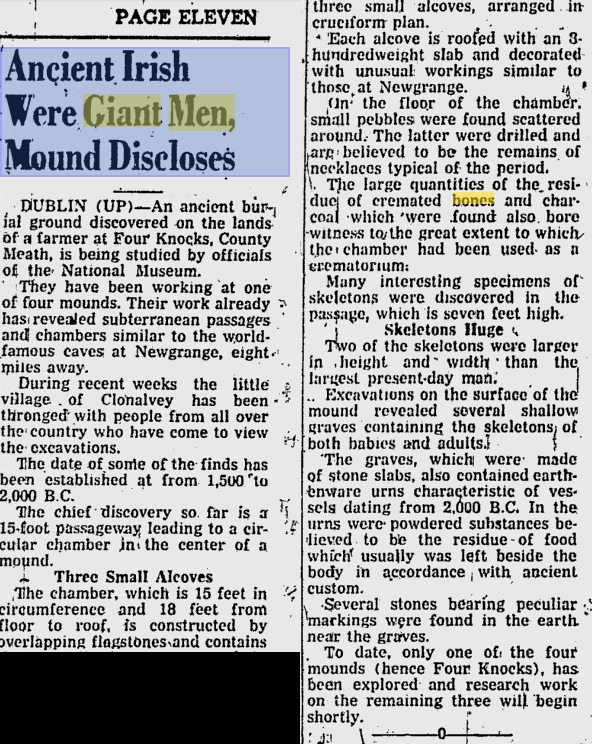 DUBLIN (UP) -An ancient burial ground discovered on the lands of a farmer at Four Knocks, County Meath, is being studied by officials of the Natural Museum. They have been working at one of four mounds. Their work has already revealed subterranean passages and chambers similar to the world famous caves of Newgrange, eight miles away.

During recent weeks the little village of Clonalvey has been thronged with people from all over the country who have come to view the excavations. The date of some of the finds has been established at from 1,500 to 2,000 B.C. The chief discovery so far is a 15-foot passageway leading to a circular chamber in the center of a mound. Three Small Alcoves

The chamber, which is 15 feet in circumference and 18 feet from the floor to the roof, is constructed by overlapping flagstones and contains three small alcoves, arranged in cruciform plan.

Each alcove is roofed with an 8 hundredweight slab and decorated with unusual workings similar to those at Newgrange.

On the floor of the chamber, small pebbles were found scattered around. The latter were drilled and are believed to be the remains of necklaces typical of the period.

The large quantities of the residue of cremated bones and charcoal which were found also bore witness to the great extent to which the chamber had been used as a crematorium:

Many interesting specimens of skeletons were discovered in the passage, which is seven feet high.

Two of the skeletons were larger in height and width than the largest present-day man.

Excavations on the surface of the mound revealed several shallow graves containing the skeletons of both babies and adults.

The graves, which were made of stone slabs, also containing earthenware urns characteristic of vessels dating from 2,000 B.C. In the urns  were powdered substances believed to be the residue of food which usually was left beside the body in accordance with ancient custom.

Several stones bearing peculiar markings were found in the earth near the graves. To date, only one of the four mounds (hence Four Knocks), has been explored and research work on the remaining three will begin shortly.