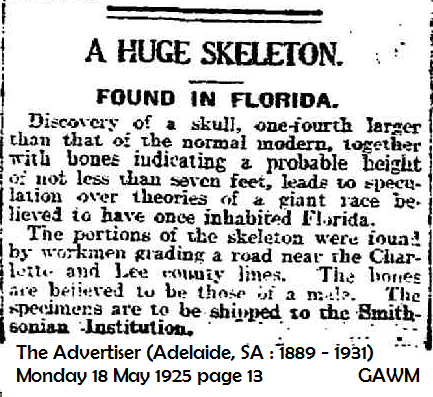 Discovery of a skull, one forth larger than that of the normal modern, together with bones indicating a probable height of not less than seven feet, leads to speculation over theories of a giant race believed to have once inhabited Florida. huge skeleton found

The portions of the skeletons were found by workmen grading a road near Charlotte and Lee county lines. The bones are believed to be those of a male. The specimens are to be shipped to the Smithsonian Institution.

“the peak of your civilization.”

Bottom-line: The government is pushing a state religion that’s called pantheism, many people know it as the theory of evolution. Races of 7 footers do not fit in the evolutionary theory, obviously neither does 98% of the fossil record. (thats another matter) You would need to dig up 2 million 300 thousand graves to find a modern 7 footer the tallest NBA player that played in the 2013-14 year was only 7 foot 3. The past, in ancient times the record is full of 7 footers and much taller this is the information that is hidden because the fossil record is the biggest enemy to evolutionism.