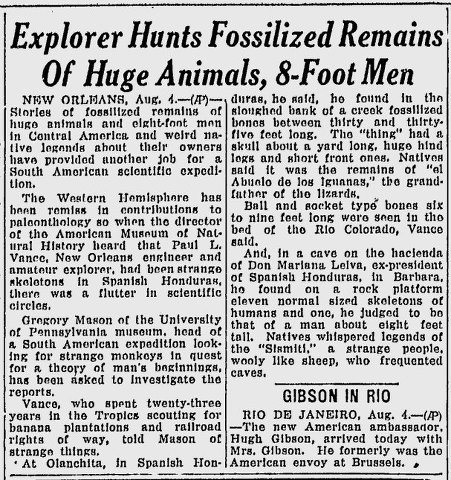 Stories of fossilized remains of huge animals and eight-foot men in Central America, and weird native legends about their owners have provided another job for a South American scientific expedition.

The western Hemisphere has been remiss to contributions in paleoanthropology so when the director of the American museum of natural history heard that Paul L. Vance, New Orleans engineer and amateur explorer, had been strange skeletons in Spanish Honduras, there was a flutter in scientific circles.

Gregory Mason of the university of Pennsylvania museum, head of a South American expediton looking for strange monkeys in quest for a theory of man’s beginnings, has been asked to investigate the reports.

Vance, who spent twenty three years in the tropics scouting for banana plantations and railroad rights of way. told Mason of strange things.

At Olauchita, Honduras, he said he found in the sloughed bank of a creek fossilized bones between thirty and thirty-five feet long. The “thing” had a skull about a yard long, huge hind legs and short front ones. Natives said it was the remains of “el Abuelo de los iguanas,” the grandfather of the Lizards.

Ball and socket type bones six to nine feet long were seen in the bed of the Rio Colorado, Vance said.

And in a cave on the hacienda of Don Mariana Leiva, ex-president of Spanish Honduras, in Barbara he found on a rock platform eleven normal sized skeletons, and one, he judged to be that of a man about eight feet tall. Natives whispered legends of the “Siamitl,” a strange people, wooly like sheep who frequented caves

Eight foot skeletons are quite common in the fossil record. The native legends are verified by these reports, its unfortunate that this information is not-so public. These mound-builders, Sea People, Cave dwelling Giants are reminiscent of the Lovelock and other similar accounts. I like finding accounts in countries and States that have accounts yet. Like a missing piece of the puzzle, i am predicting all countries and States will be filled in, in spite of the burying of this evidence.