The county was organized on March 1, 1818, from land given by Athens, Fairfield, and Ross counties. Its name is from the Hocking River, the origins of which are disputed but is said to be a Delaware Indian word meaning “bottle river”.

First found were the skeletons of three intrusive burials well above the floor of the mound. The leg and arm bones has been gnawed by animals before they were interred. What interested Dr. Miller very much was the fissures found on all the large bones and a possible cause of their death. In a grave three feet deep were found two complete skeletons, all the bones in a good state of preservation.

One was a normal sized man who had been killed by bone arrows. One had interred the mouth and pierced the spinal cord at the base of the skull. The other had gone through the eyeball and split the skull in back of the eye. Both bone arrows or shafts were still intact. One is still as it was originally found.

The other was a giant of a man estimated by doctors and dentists to have been 7 1/2 feet tall and at least 145 years old. Part of the teeth had been extracted and the jaw bone atrophied. The teeth remaining were very long and showed a positive advanced stage of pyorrhea. 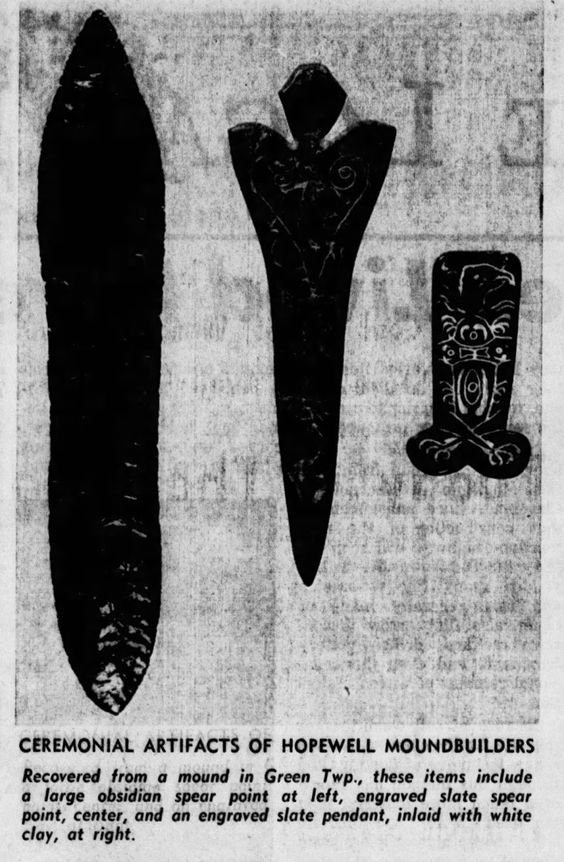