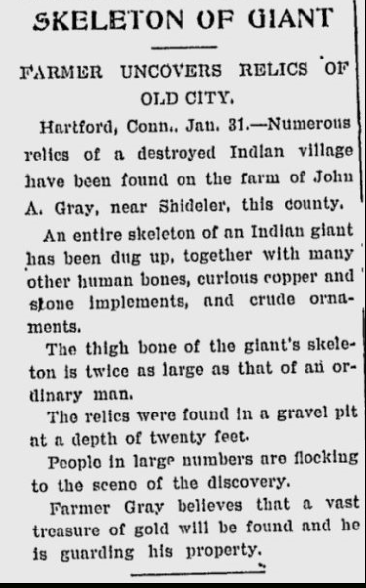 Hartford, Connecticut,. Jan. 31. – Numerous relics of a destroyed Indian village have been found on the farm of Jonathan A. Gray, near Shideler, this county, An entire skeleton of an Indian giant has been dug up, together with many other bones, curious copper and stone implements, and crude ornaments.

The thigh bone of the giant’s skeleton is twice as large of that of an ordinary man.

The relics were found in a gravel pit at a depth of twenty feet.

People in large numbers are to the scene of the discovery.

Farmer Gray believes that a vast treasure of gold will be found and he is gaurding his property.

“The thighbone of the skeleton is twice as large as an ordinary man.” This should not be surprising, there is an example of a thigh bone piece which is so large it would dictate that it came from a man nine feet tall. That is the Femur from Rhineland Germany. The Femur fragment from Castelneu is from a person 15 feet tall. Hopefully more documentation will show up and we can get more specifics on the length of this giant.