The skull is near the size of a two-gallon bucket

Clarksburg, West Virginia,. Nov 25, – While grading for the Fairmont and Wyatt railroad on the farm of B. W. Shinn, near Pine Bluff, workmen unearthed the skeleton of a human giant believed to have lived in a prehistoric age. The skull and several of the large bones are in splendid preservation. The skull is near the size of a two-gallon bucket with no forehead and a large underjaw. The ribs are about are about three times the size of the present day average man. One thigh bone, well preserved, measured four and one half feet in length.

The skeleton was found in a mound and there had been long speculation as to what the mound contained, but all feared to open it. The skeleton will be shipped to the New York Museum.

The New York Museum was a short-lived dime museum at 210 Bowery in Manhattan, New York City, operating from the early 1880s to 1896. Managed by a Louis Hickman, it was refused a licence in 1883, and investigated for gambling and child prostitution in 1884, but remained in business. In 1889 it became the Fairyland Dime Museum and closed in 1896. 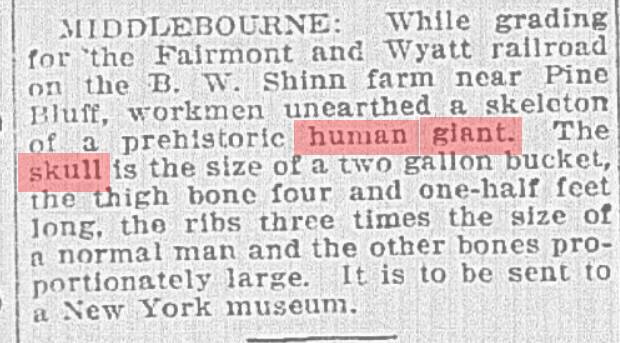