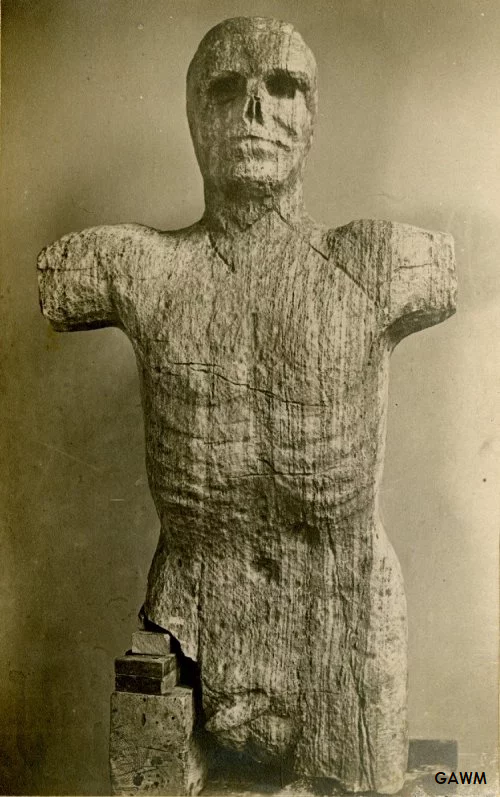 The Giant of Happy Valley

Images from the British Museum, They show the torso and head of a large human figure, carved out of wood.  The height of the sculpture is 4 foot 9 inches, meaning the whole sculpture, a with legs, would have stood well over seven feet tall.

The caption suggests it was taken to Professor Flower at the Natural History Museum, and while elsewhere the photo is described as “early 20th century” Professor Flower, also a noted amateur Anthropologist, retired in 1898 and died in 1899.

The sculpture is made of a single piece of wood, and is heavily weathered, so we can infer it spent a lot of time outdoors. The description reads “Photograph (black and white); profile of a carved wooden human torso on a plinth, from Vancouver Island,” but it’s not really on a plinth, in fact it is just on an ad hoc stack of slabs and leans back on some cloth pressed against the wall.

2. The sculpture appears to have had its arms cut off and also to be cut off, crudely, at the hips. I suspect this happened to make it more convenient to pack in a crate back to the UK.  On the profile below you can see what look like false-starts by the saw used on the shoulders. It also makes it fit with a European tradition of broken torsos.  Whether the arms were spread wide (necessitating joinery I suspect) or, more likely, bent to the front, it’s hard to say.

3. The frank depiction of external genitalia would be unexpected in Victorian Canada settler society.  However, some of the large, naturalistic “welcome figures” on the NW Coast  anatomically correct – see this Coast Salish example by Simon Charlie.

4. The owner of the sculpture took it to a Natural History museum where it was photographed, suggesting to me it was not considered to be fine art carved by an artist of European descent. Indeed, the owner took it to an amateur Anthropologist at the museum. I think that’s what you would do at the time if you suspected or knew the sculpture was non-European in origin. The owner is listed as “Left McCallum” which could be “Lester” or, I suppose, Lieutenant. By the way, there is a McCallum road not that far from Colwood, near Florence Lake.  I’m sure someone knows who this McCallum is.

5. The face is carved as a strange mixture of skull-like and life-like components.  The eyes are rectangular sockets.  The vomer is clearly visible, though the nose itself is seen in the profile, below.  Yet the lips are carved, and the face lacks the toothy rictus of a typical representation of a skull.  However, close attention to the lips shows them to be very wide, down-turned and almost stylized in a way familiar to NW Coast formline art. Interest in the ribs is something one commonly sees in pictographs and petroglyphs, and on this sculpture as well. Indeed, compare this Salish spindle-whorl with prominent ribs and lips, navel, and exposed genitalia.

6. The head appears to have a groove or indentation around the brow, making it easy to fit a hat to it, as in the previously-cited example.

7. Where Happy Valley Road meets Metchosin Road near Parry Bay is an area with particularly numerous defensive sites, village sites and a rich funerary landscape. Equally, Happy Valley itself appears to drain into Witty’s Lagoon, also an area of high cultural importance close to Albert Head. A large sculpture would be consistent with these kinds of places.

8.  I’m up on Quadra Island at the moment, and Pete and I searched through the online Daily British Colonist and found no mention of “the Giant of Happy Valley”, so it doesn’t seem this was a well-known tourist attraction or anything. 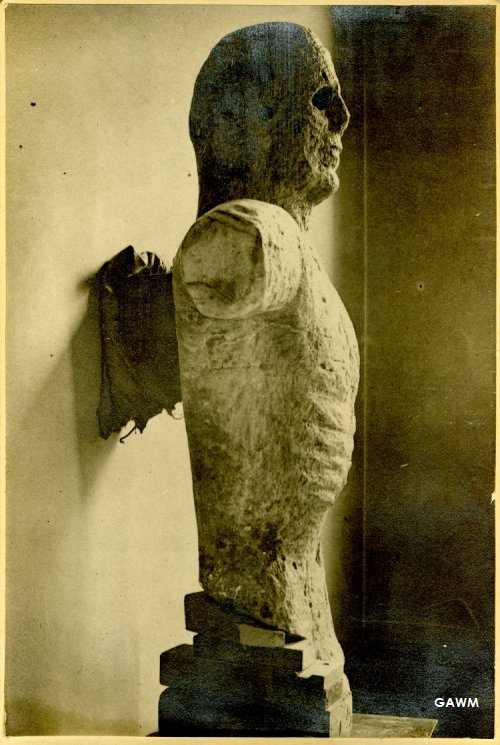 (I think there is as much reason to suppose this is a scavenged and mutilated monumental Coast Salish sculpture, which represents a large human. These images depict a 7 foot individual and is part of “giant archaeology that”. It’s a rather important piece, and one that should be repatriated, if it still exists.)

The Giant of Happy Valley