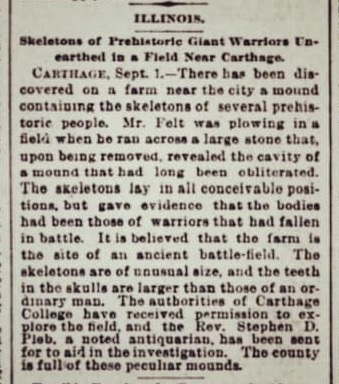 Skeletons of Prehistoric Giant Warriors in a field near Carthage.

CARTHAGE, Sept. 1. – There has been discovered on a farm near the city a mound containing the skeleton of several prehistoric people. Mr. Felt was plowing in a field when he ran across a large stone that , upon being removed, revealed the cavity of a mound that had long been obliterated. The skeletons lay in all conceivable positions, but gave evidence that the bodies had been those of warriors that had fallen in battle. It is believed that the farm is the site of an ancient battle-field. The skeletons are of unusual size, and the teeth in the skulls are larger than those of an ordinary man. The authorities of Carthage College have received permission to explore the field, and the Rev. Stephen D. Pleb. a noted antiquarian, has been sent for to aid in the investigation. The county is full of these peculiar mounds.