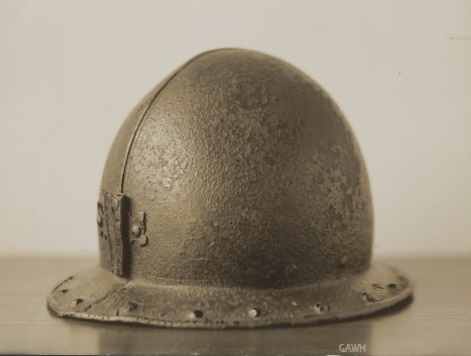 Frisians are  the tallest people in the world. Dutch people are the tallest as a nation and Frisians, who live in the north of the country, are the tallest in the land. Here is the giant helmet of Frisian freedom fighter Grutte Pier (around 1500) who was a giant. 1)

“Pier Gerlofs Donia was a Frisian warrior, pirate, and rebel who lived between the 15th and 16th centuries AD. He is known by his nicknames – Grutte Pier in West Frisian, Grote Pier and Lange Pier in Dutch, and Pierius Magnus in Latin.

While many of these nicknames all mean the same thing, and in English, is translated as Great / Big Pier. This is a reference to his legendary size and strength

“Pier was so strong that he could bend a coin using just his thumb and forefinger. Another legend attesting to his great strength is that he was able to pick up a plough with just one hand.”

“Pier brandished a Biedenhänder, a sword that was wielded with two hands. ‘Grutte Pier’s Sword’ is today kept in the Fries Museum in Leeuwarden. This weapon is as tall as the legendary warrior himself, and weighs 6.6 kg (14.6 lbs)” 3)

The helmet of Grutte Pier is not acromegalia in shape. It is unlikely that Pier was a genetic malfunction, or some mutation of nature. It is more likely that this is a case of revertion. Or just a case of greater maturity which has now faded in our current times.  This giant helmet is kept in the museum of the city of Leeuwarden Friesland, Netherlands. 2)

Robert Wadlow and the Giant Helmet!

The helmet of Grutte Pier would wobble around even on the pituitary malfunctioned skull of Robert Wadlow.  This helmet is an important hard evidence for giants as the runt-hunters and Wadlow fanatics may say that the sword of Grutte Pier is a ceremonial, making up pretending  that there is some ceremony, imagining a normal size man using a giant sword for show. What this helmet does is debunk the idea of giant swords being ceremonial. No ceremony can be imagined for the sword, in conjunction with the helmet.   This may very well be the catalyst in setting the record straight that all of these giant swords, axes and other weapons are usable, and to size of their giant wearers.