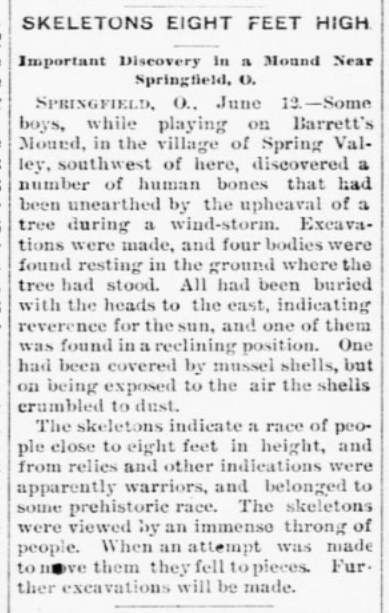 The county was established on March 24, 1803 and named for General Nathanael Greene, an officer in the Revolutionary War.

Some boys, while playing on Barret’s Mound, in the village of Spring Valley, southwest of here, discovered a number of human bones that had been unearthed by the upheaval of a tree during a windstorm. Excavations were made and four bodies were found resting in the ground where the tree had stood. All had been buried with heads to the east, indicating reverence for the Sun, and one of them were found in a reclining position. One had been covered in mussel shells, but on being exposed to the air the shell crumbled to dust.

The skeletons indicate a prehistoric race of people close to eight feet in height and from relics and other indications were apparently warriors and belonged to some prehistoric race. The skeletons were viewed by an immense throng of people. When an attempt was made to move them they fell to pieces. Further excavations will be made.