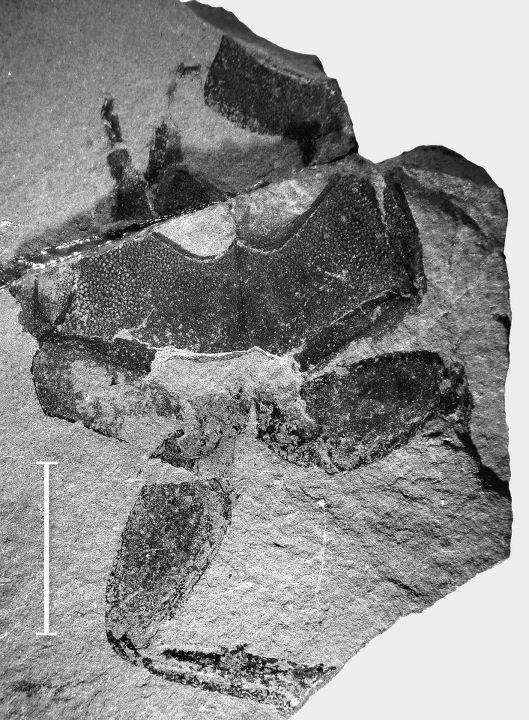 A fossil of a scarab beetle has been identified by a University of Nebraska-Lincoln entomologist as the world’s largest known scarab fossil and represents a new genus and species.

Giant Scarab Beetle: Oryctoantiquus borealis was officially named in June by Brett C. Ratcliffe, curator of insects at the University of Nebraska State Museum and professor of entomology at UNL, and Dena Smith, a geologist at the University of Colorado. Their article describing the (Giant Scarab Beetle) was published in Coleopterists Bulletin, a scientific journal devoted to the study of beetles. The fossil is a ventral mold of a jumbled portion of the beetle’s sternum and some of its legs.

The fossil was found in north-central Oregon in the. . .  Middle Eocene Clarno formation by Smith and a paleontologist from the University of California-Berkeley. Smith was referred to Ratcliffe, who had previously worked with paleontologists to identify fossils of insect remains and who leads an internationally recognized lab that specializes in the taxonomy of scarab beetles.

“This specimen is also the oldest specimen attributable to a group of scarabs known as rhinoceros beetles,” Ratcliffe said. “Rhinoceros beetles today contain some of the most spectacular insects on Earth because of the large size and extravagant horns in the males of some species. There have been only a handful of rhinoceros beetle fossils discovered and named previously, but none approach Oryctoantiquus borealis in size or age.” The largest known fossil scarab had been:. . .

Cheirotonus otai, a 45-millimeter long-arm chafer (not a rhino beetle) from the Middle Miocene in Japan,

while the new species is 50 millimeters in length.

The new genus name, Oryctoantiquus, comes from the Greek “oryktes,” which means digger, and the Latin “antiquus,” meaning old, while the species name, “borealis,” means northern in reference to its northerly location in Oregon.

The discovery of O. borealis has caused a stir among entomologists who study scarab beetles, Ratcliffe said, because its location proves that large rhinoceros beetles existed in northwestern North America . . .  before the Panama land bridge became established. . . . Entomologists had not previously known of any large scarabs in North America that did not have their ancestors coming from Central or South America. This fossil demonstrates that large rhinoceros beetles entered North America earlier from other areas, possibly Asia.

“We had not previously known of any living, large rhinoceros beetles in North America that did not originate from tropical regions of Central or South America,” Ratcliffe said.

The fossil plants of the Oregon West Branch Creek included subtropical species, such as bananas, that indicate the habitat of O. borealis would have been similar to today’s subtropical and tropical forests.

The link  is to a black-and-white JPEG image of Oryctoantiquus borealis. The scale bar in the image is 10 millimeters.