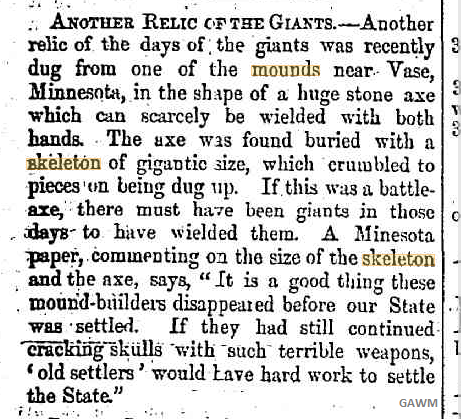 ANOTHER RELIC OF THE GIANTS.

-Another relic of the days of; the giants was recently dug from one of the mounds near. Vase, (Vasa?) Minnesota, in the shape of a huge stone axe which can scarcely be wielded with both hands. The axe was found buried with askeleton of gigantic size, which crumbled to pieces on being dug up. If this was a battle axe, there must have been giants in those days- to have wielded them. A Minesota paper, commenting on the size of the skeleton and the axe, says, “It is a good thing these mound-builders disappeared before our State was settled. If they had still continued cracking skulls with such terrible weapons, ‘old settlers’ would Lave hard work to settle the State.”
The McIvor Times and Rodney Advertiser (Heathcote, Vic. : 1863 – 1918)Fri 23 Jul 1869 Page 4 ANOTHER RELIC OF THE GIANTS.
https://trove.nla.gov.au/newspaper/article/93694238?searchTerm=mound%20builder%20skeleton&searchLimits=