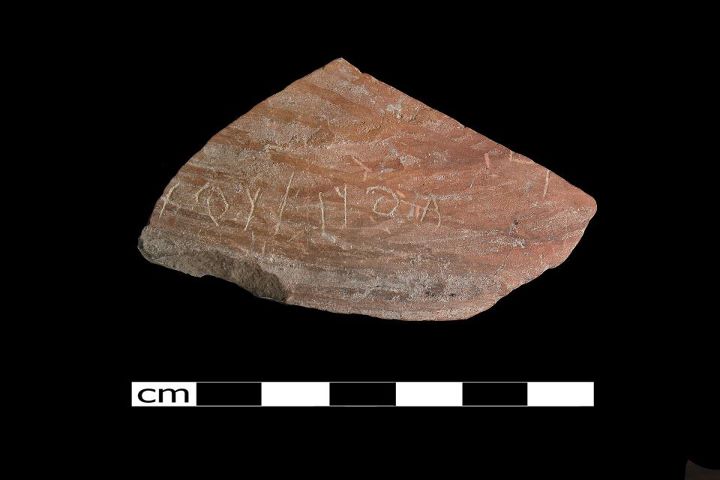 Israeli archaeologists have found evidence for Goliath’s existence on a small ceramic shard. . .

The brown fragment, probably part of a bowl, was found 2-metres below ground at a decade-old dig in Tell es-Safi in southern Israel.

Called in the Bible “Gath of the Philistines”, Tell es-Safi is one of the largest tells (mounds covering ancient ruins) in Israel.

The Old Testament (I Samuel 17) describes a heavily-armed Philistine giant named Goliath, about 1000 BC, who challenged the Israelite army to send a man to fight him. David, a shepherd who later became Israel’s king, accepted and killed the giant with a sling and stone.

Skeptics and liberal theologians reject the story as myth invented to glorify David’s dynasty. They commonly cite the 19th-century “documentary hypothesis” according to which much of the Old Testament was fabricated by Jewish writers in the 6th or 5th century BC and  therefore erroneous to them.

The Tell es-Safi inscription, dated to about 900 BC, is the oldest Philistine inscription yet found in Israel. It’s written in archaic “Proto-Canaanite” letters and contains two non-Semitic names “Alwt” and “Wlt” which are Philistine renderings of “Goliath”.

Dr. Aren Maeir, the excavation director and head of the archaeology department of Bar-Ilan University near Tel Aviv, said: “It can be suggested that in 10th – 9th century Philistine Gath, names quite similar, and possibly identical, to Goliath were in use.”(words “quite” and possible are clues to bias conjecture or deconstruction without probable cause)

Lawrence Mykytiuk, a Purdue University Bible Scholar, said: “This inscription supports the Bible, not with a direct identification of Goliath, but in its historical and linguistic background.” (Lorenzi, R 2005, Discovery News)

This adds to the evidence given in Investigator 105 that Goliath was a real person and not a literary myth fabricated 500 years later.

At least 62 people named in the Old Testament and over 300 geographical locations have independent archaeological verification. (Investigator 50 & 61)