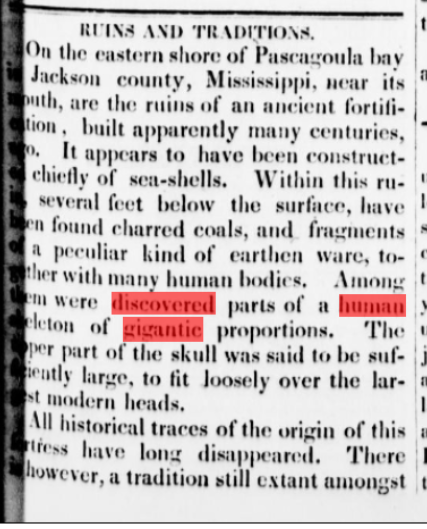 On the eastern shore of Pascagoula bay in Jackson county, Mississippi. Near its mouth, are the ruins of a ancient fortification, built apparently may centuries, ago. It appears to have been constructed chiefly of sea-shells. Within this ruin, several feet below the surface, have been found charred coals, and fragments of a peculiar kind of earthen ware, together with many human bodies. Among them were discovered parts of a human skeleton of gigantic proportions. The upper part of the skull was said to be sufficiently large, to fit loosely over the largest modern heads.

All historical traces of the origin of this fortress have long disappeared. There is however, a tradition still extant amongst – . . .