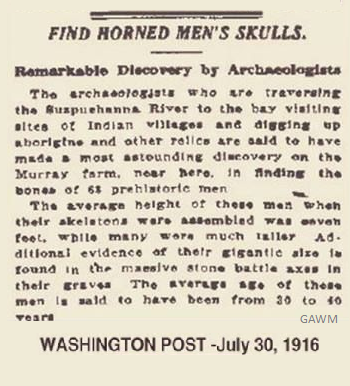 The archaeologists who are transversing the Susquehanna River to the bay visiting sites of Indian villages and digging up aborigine and other relics are said to have made a most astounding discovery on the Murray farm. massive stone battle axes

The average height of these men when their skeletons were assembled was seven feet. While many were much taller Additional evidence of their gigantic size is found in the massive stone battle axes in their graves. The average age of these men is said to have been from 30 to 40 years.