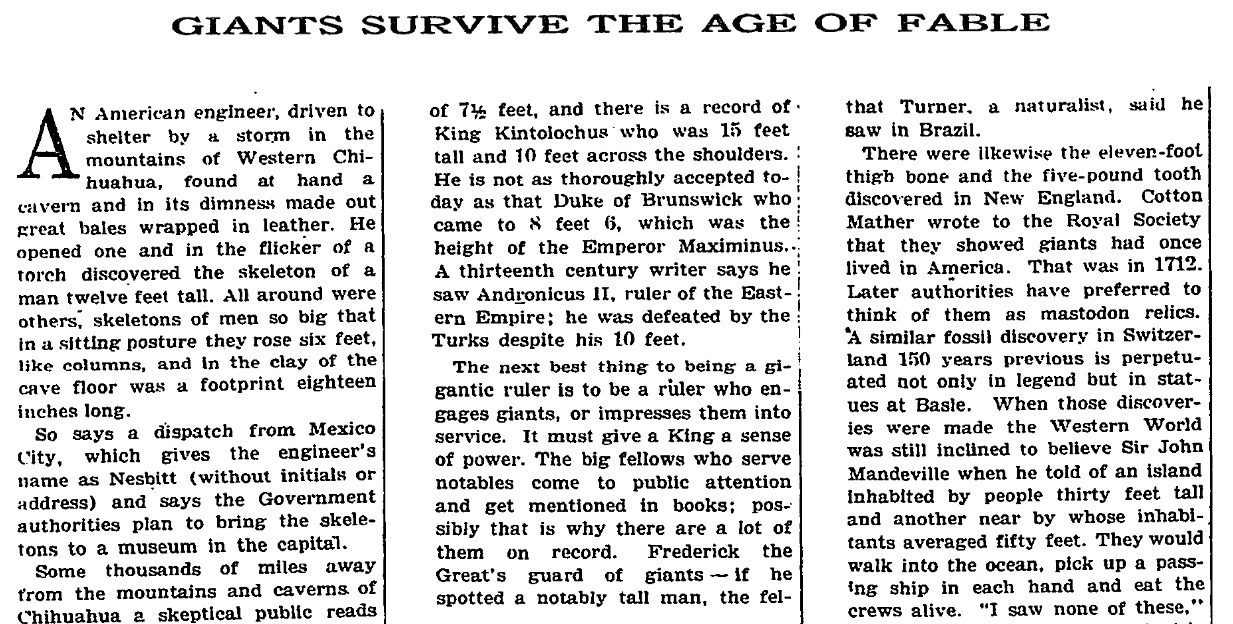 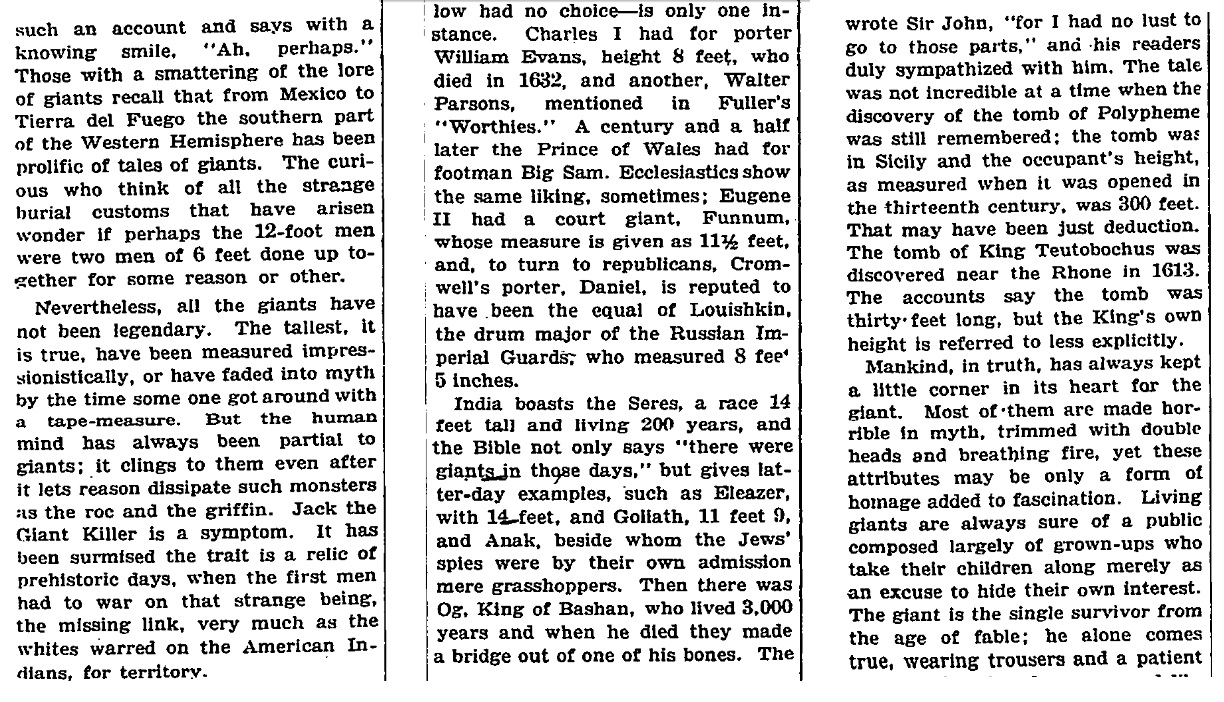 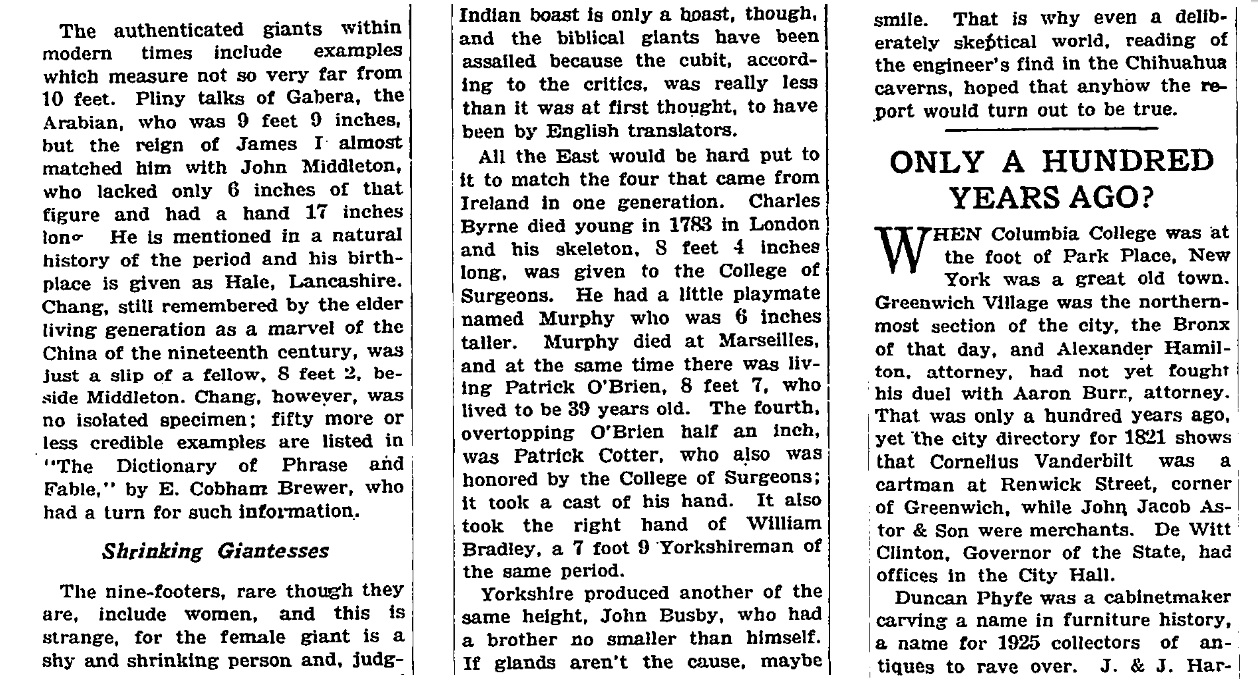 An American engineer, driven to shelter by a storm in the mountains of Western Chihuahua, found at hand a cavern and in its dimness made out great bales wrapped in leather. He opened one and in the flicker of a torch discovered the skeleton of man twelve feet tall. All around were others, skeletons of men so big that in a sitting posture they rose 6 feet, like columns, and in the clay of the cave floor was a footprint eighteen inches long.
So says a dispatch from Mexico City, which gives the engineer’s name as Nesbitt (without initials or address) and says the Government authorities plan to bring the skeleton to a museum in the capital.
Some thousands of miles away from the mountains and caverns of Chihuahua a skeptical public reads such an account and says with a knowing smile, “Ahh, perhaps.” Those with a smattering of the lore of giants recall that from Mexico to Tierra del Fuego and southern part of the Western Hemisphere has been prolific of tales of giants. The curious who think of all of the strange burial customs that have arisen wonder if perhaps the twelve foot men were two men of six feet done up together for some reason or other.
Nevertheless, all of the giants have not been legendary. The tallest, it is true, have been measured impressionisticly, or have faded into myth by the time someone got around with a tape measure. But the human mind has always been partial to giants; it clings to them even after it lets reason dissipate such monsters as the roc and griffin. Jack the Giant Killer is a  symptom. It has been surmised the trait is a relic of prehistoric days, when the first men had to war on that strange being, the missing link, very much as the whites warred on the American Indians, for territory.

The authenticated of giants within modern times include examples  which measure not so very far from 10 feet.

* Pliny talks of Gabera, the Arabian, who was 9 feet 9 inches

* but the reign of James I almost matched him with John Middleton, who lacked only 6 inches of that figure and had a hand 17 inches long.  He is mentioned in a natural history of the period and his birthplace is given as Hale, Lancashire.

* Chang, still remembered living generation as a marvel of the China of the nineteenth century, was just a slip of a fellow, 8 feet 2, beside Middleton. Chang, however was no isolated specimen; fifty more of less credible examples are listed in “The dictionary of Phrase and Fable,” by E. Cobham Brewer, who had a turn for such information.