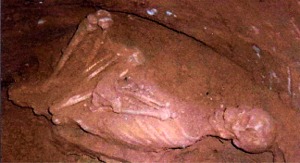 Louisville-Courier-Journal Columbia, Kentucky
January 30, 1876 Adair County
Reprinted in a Story by Wayne May in Ancient American

Two young men named White, while idly wandering in a large tract of wild, dense forest, in the south-eastern part of our county, discovered what they supposed to be a sink-hole or
fox-den, (A)  and with that idea proceeded to explore it. After a little trouble in making their way through the entrance, the cave (for such it proved to be) became large enough to admit of
their walking upright. They had proceeded thus in this passage probably, 150 yards, when they emerged into a large and picturesque gallery, the beauty and grandeur of which will
rival that of the old Mammoth itself. The room, according to their calculations, is about 150 by 100 feet, and abounds in all the varieties of the stalactite and stalagmite. Adair County

But, it’s not the things that we naturally expect to find in caves that we wish to mention particularly, but the curios remains that were discovered therein. Adair County

In the northeast corner of the first gallery, (for there are five, which we will speak of) about five feet from the ground, they noticed some strange characters or hieroglyphics neatly carved in the wall, which, upon close examination, proved to be the head-rock of a vault. Adair County

A few minutes prying served to loosen this and disclose to view the interior of an enclosure in the solid rock of about five by ten feet, which contained the remains of three skeletons, which measure eight feet seven and a half inches, eight feet five inches and eight feet four an three quarter inches in length respectively.

The heads were lying toward the east, each body parallel to the other. Beside them lay three huge (what looked to be) swords, but they were so decayed that upon being touched they crumbled to dust.”

After examining the remains closely, but finding nothing that would serve to throw any light on the question as to who and from whence they are, they closed the vault, but in doing so,
knocked their torch out, which they had contrived before entering, leaving them in anything but a pleasant predicament. After searching some time for their lost treasure, they
concluded to try to escape by feeling their way out, but in this they made the matter worse. They stated that after leaving the first large room they struck a good sized branch, and
continued following it until forced to turn into another passage the stream disappearing suddenly in a huge perpendicular gulch which led them into another spacious hall, the size of
which they believe to be quite as large as the first.

Out of this second opening, and through what they conceived to be three others similar at least in size their way seemed to gradually ascend, until their hearts were made glad by the
discovery of light ahead, and finally emerged from their ugly confinement through a hole about midway, the cliff of Russell’s Creek, having been confined in their subterranean
discovery over thirty eight hours. The whole country thereabouts is rife with speculations concerning the interesting discovery, and numbers of citizens will visit it as soon as the
Messrs. White finish their work of rendering the entrance less difficult to pass. 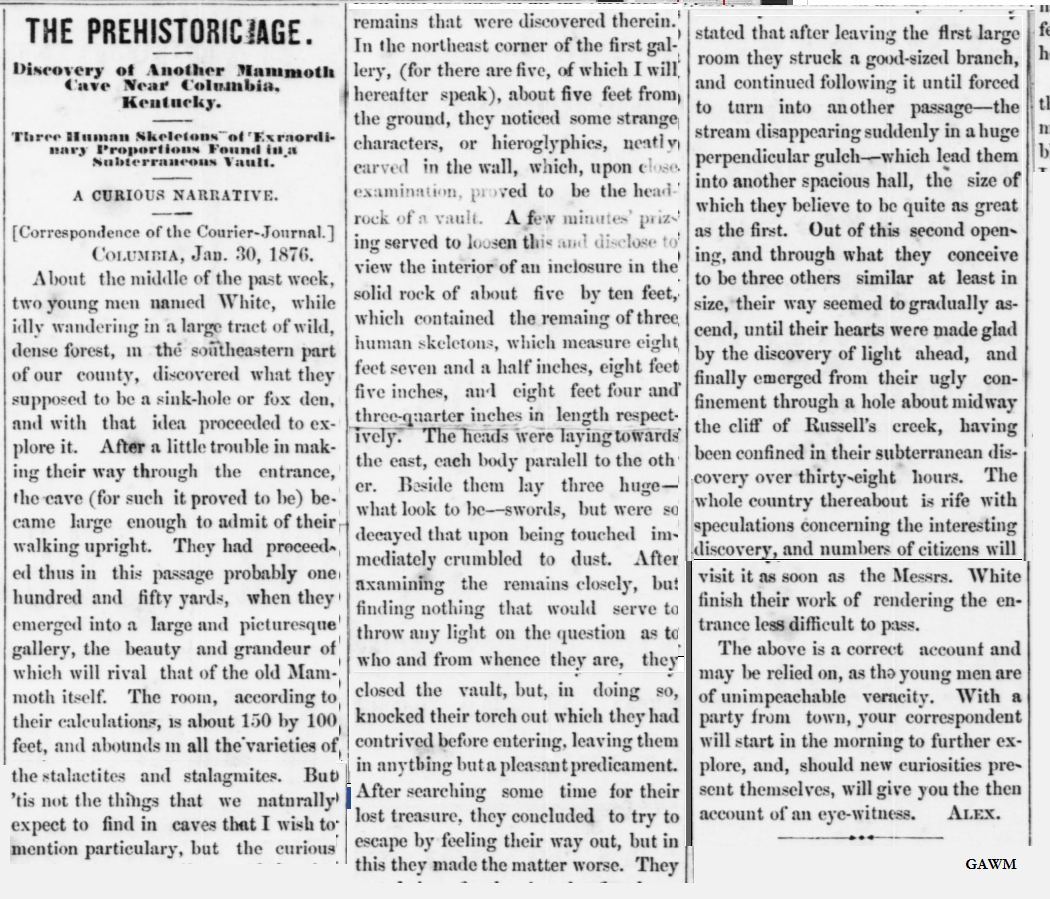