Giant with Horns from Ogden 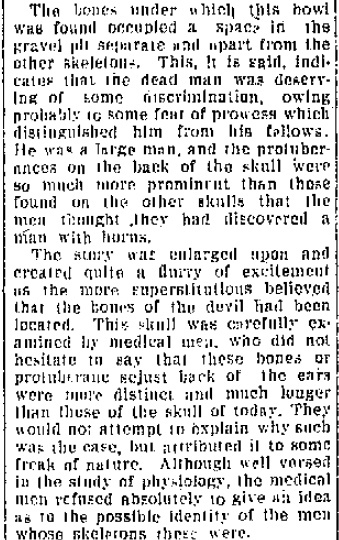 ns from Ogden Giant with Horns

The bones under which this howl was found occupied a space in the gravel pit separate and apart from the other skeletons. This, It is said, indicates that the dead man was deserving of some discrimination, owing probably in some feat of prowess which distinguished him from his fellows. Giant with Horns

He was a large man, and the protuberances on the back of the skull were so much more prominent than those found on the other skulls that the men thought they had discovered a man with horns.

The story was enlarged upon and created quite a flurry of excitement as the more superstitous believed that the bones of the devil had been located. The skull was carefully examined by medical men, who did not hesitate to say that these bones or protuberance and just back to the ears were more distinct and much longer that thoese of the skull of today. They would not attempt to explain why such was the case, but attributed it to some freak of nature. Although well versed in the study of physiology, the medical men refused absolutely to give an idea as to the possible identity of the men whose skeletons these were. Giant with Horns