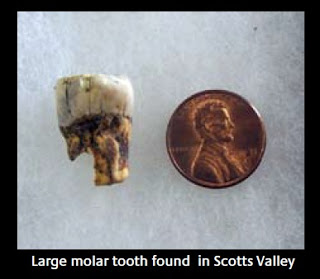 Message from the Curator

“Now that we have our first bit of potential “physical evidence” I felt inspired to share it here even though we have not yet determined exactly what it is. Our newest member, Matt, came in and donated a tooth to the museum collection.

It appears to be an unusually large human molar

with the enamel cap worn down to the pulp. About 1/3 of the tooth is missing and both of the roots are broken off; one more so than the other.

It appears to be old and fossilized and when I searched online for an image that matches there were only two that came close so far: one was a bear tooth, the other a Neanderthal tooth (Emphasis added). He found the tooth in 2002 in Scotts Valley where people dig for shark’s teeth. It was laying on the ground in the woods above the sand cliff where people normally dig. So far I’ve sent an email to paleoanthropologist Dennis Etler asking him to stop by and take a look at it. He has not come in yet, although he said he would. We’ve received quite a number of encounter stories since the museum opened three years ago. I receive reports on almost a weekly basis in the museum; it literally adds up to an average of a little over one story per week. I say “story” rather than “report” to differentiate between something we can follow-up on (report) and other anecdotes that cannot be further researched (stories). The situation here is such that sometimes I’m dealing with several visitors at once; hearing a story while ringing up a sale at the same time, for example. Frequently the visitor is hurried for time or being tugged on by companions or children and the story is truncated or sketchy. For these and various other reasons, including my own mistakes, I occasionally don’t catch their name and phone number, and/or the notes I took can’t be understood when I read them again months later. I’m working on making this happen less often, as some of the best stories I have are anonymous, although I did look the person in the eye when hearing the story (except the time or two I’ve heard a story over the phone).”

My opinion is that the tooth does NOT resemble a bear’s molar closely but it IS a very good match for a Neanderthal molar. Neanderthal crowns are usually worn very flat and their roots are also unusually expanded or inflated, a condition known as Taurodontism (Bull-toothed) 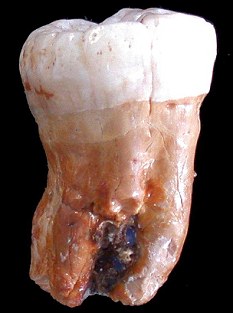 A Neanderthal molar tooth from a recent internet news article on Neanderthal diet for comparison. 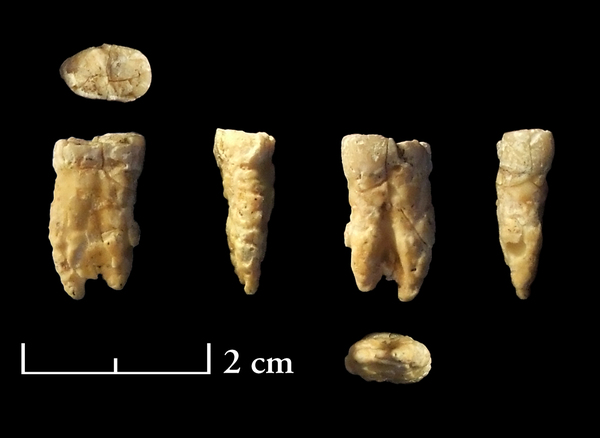 A selection of Neanderthal teeth
A penny just happens to be almost an exact centimeter in diameter. Measure it yourself and see!
That means the size of the big tooth in the museum and the Neanderthal tooth are very comparable.
What we are looking at is a giant tooth even for a Neanderthal, Neanderthals had teeth slightly larger than today’s humans. This one is very huge no estimations of how tall the individual was who owned this tooth but remember the rule of microcephaly: That as all things mature the body size increases during growth which makes the individual adorn a smaller head to body ration as the size increases.
Chris L Lesley/Greater Ancestors World Museum
http://frontiersofzoology.blogspot.com/2013/01/bigfoot-museum-big-tooth.html