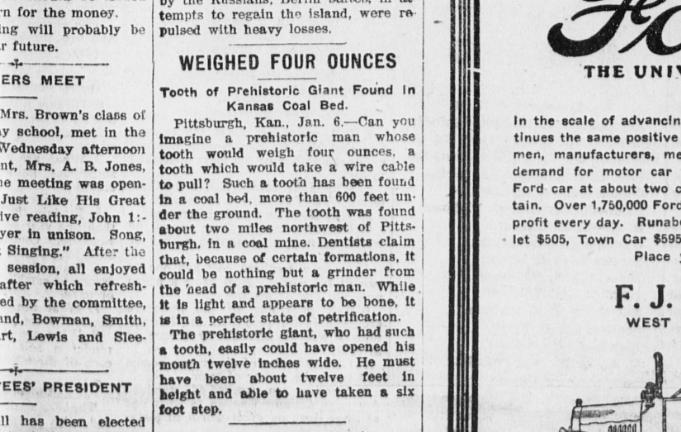 Pittsburgh, Kan., Jan. 6,-Can you imagine a prehistoric man whose tooth  would weigh 4 ounces’, tooth which would take a wire cable to pull? Such a tooth has been found in a coal bed, more than 600 feet under the ground. The tooth was found about two miles northwest of Pittsburgh, in a coal mine. Dentists claim that, because of certain formations, it could be nothing but a grinder from a prehistoric man. While it is light and appears to be bone, it is in a perfect state of petrification.

The petrified giant, who had such a tooth, easily could have opened his mouth 12 inches wide. He must have been about twelve feet in height and able to have taken a six foot step. 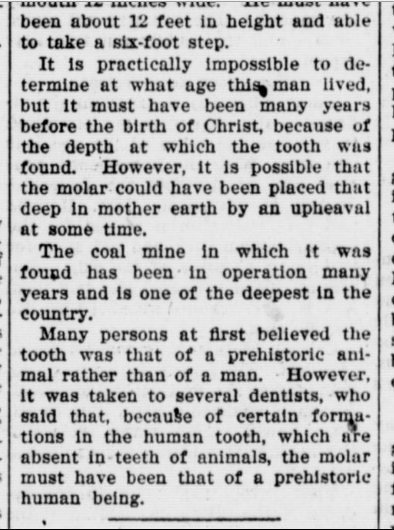 First of all we have here a peer reviewed article by professional dentists who examined the tooth. Next we have an anthropolgical artifact that could be replicated. We have an example of one of the larger accounts of giants, a 12 footer. We also have a location 600 feet below the surface, and in a coal seam, which makes this one of the most amazing ooparts.

Not only is it ancient in a 600 foot coal seam but its still bone showing the coal seam to be quite young. A stunning blow to the evolutionary imagined timeline, enough to make mother-nature a bit course.