The skulls found from Erie and Huron counties were found articulated (whole and complete) the rest of the skeletons were found dis-articulated as if there had been a battle. It was a large mass grave of genocide, people from a larger variation, a larger race than is currently known.
~Chris L Lesley
To the southeast of Milan, and close to the Huron County line, on the Butman Farm is acold spring of considerable size, at one time believed to possess medicinal properties, which it no doubt does in an equal degree with many others that have built and supported magnificent sanitariums, while Milan has neglected her many natural advantages.
The mound builders have left their traces in this township. There were three clearly defined fortifications when the first settlers came here. All three were upon the high banks of the Huron; the first in the second section, near the north line, and on the west side of the river; the second in the first section, on the east side, and the third in the fourth section, on the place occupied by Mrs. Morrill. F. W. Fowler, one of the pioneers, described these earth works as from two to four feet above the surface of the ground. Large trees were growing upon some of these embankments. Near these forts were mounds or hillocks, which were found to contain human bones, promiscuously thrown together, as if a large number of bodies had been buried at one time. The skull bones, when found entire, were shown by measurement to be larger, upon the average, than those of the present race, and all exhibited marks that would indicate that life had been taken in deadly combat. Scattered among the skulls and vertebrae, and arm and leg bones, were stone pipes and fragments of burnt clay. Otherwise there was nothing to testify of the nature of the vanished race. Long before the coming of the white men the fertile lands along the Huron were a favorite camping ground for the Indians. [4] 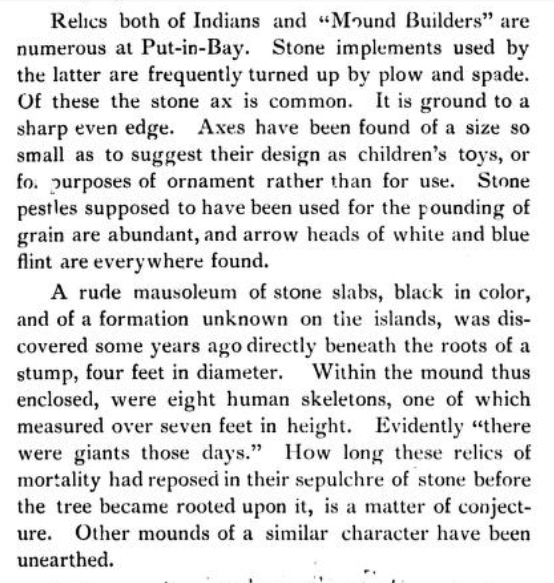 1) History of Huron and Erie Counties, Ohio 1879. “were shown to be larger upon average, than those of the present race.”
Nephilim Chronicles,

2) A Tradition of Giants, Ross Hamilton:footnote 97 Evening Telegram, Elyria, Ohio, Sunday, February 27, 1910 (These bones were reburied on the spot, and this grave exists yet today.

3) The Evening Telegram, Norwalk Ohio, February 28, 1910. Prehistoric Man is Found near Norwalk. Fitchville is Excited Over the finding of a Giant Skeleton Which Measured over Eight Feet in Length. 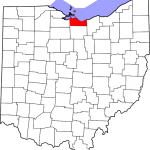 Notice that defects like gigantism and acromegaly are not the subject, because the subject is a race. There are many of these stories that actually talk about a race.
Erie County 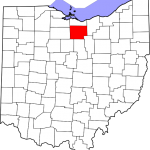