The article from 1940:
Beach Giant Skull Unearthed By WPA Workers Near Victoria
Believed to Be Largest Ever Found in World; Normal Head Also Found
That Texas “had a giant in the beach” in the long ago appears probable from the large skull recently unearthed on a mound in Victoria County, believed to be the largest human skull ever found in the United Estates and probably in the world.
Twice the size of the skull of a normal man, the fragments were dug up by W. Duffen, archeologist who is excavating the mound in Victoria County under a WPA project sponsored by the University of Texas. In the same mound and at the same level, a normal sized skull was found. The peices taken from the mound were reconstructed in the WPA laboratory under the supervision of physical anthopologists.
A study is being made to determine whether the huge skull was that of a man belonging to a tribe of extraordinary large men, or whether the skull was that of an abnormal member of a tribe, a case of gigantism. Several large human bones have been unearthed at the site.
Marcus B. Goldstein, physical anthropologist, employed on the WPA project, formerly was an aide of Alen Horliken, curator of the National Museum of Physical Anthropology.
Finds made through excavations in Texas are begining to give weight to the theory that man lived in Texas 40,000 years ago, it is said. 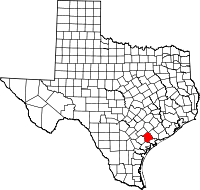 Now confirmed by the university records!
A newspaper article from 1940 tells that a giant- sized skull was found in Texas. This skull is now confirmed from the University of Texas

“The particular specimen that you ask about, the large skull found at the Morhiss site in 1939, is noted in our paperwork as missing from the collection (and has been for some time, not appearing in inventories undertaken since the collection arrived at TARL).”

Physical anthropologist Marcus S. Goldstein says in his manuscript, “A couple of unusual crania were unearthed at Morhiss Mound in Victoria County. One of these, although much mended and its base quite warped, is nevertheless obviously a skull of extraordinary size, in many respects larger than any yet reported. The bones of this individual do not indicate excessive stature, but they are remarkably robust and plainly point to a very muscular man. The possibility of abnormality, perhaps an endocrine disturbance, arose immediately, but the largeness of the skull seems to be symmetrical, the hand bones do not show the ‘knobbing’ typical of acromegaly, and stature was evidently in no wise unusual. Moreover, other crania from the same site approximate the skull in question. Hence, it is my opinion that this exceptionally large skull was not the result of endocrine pathology.” 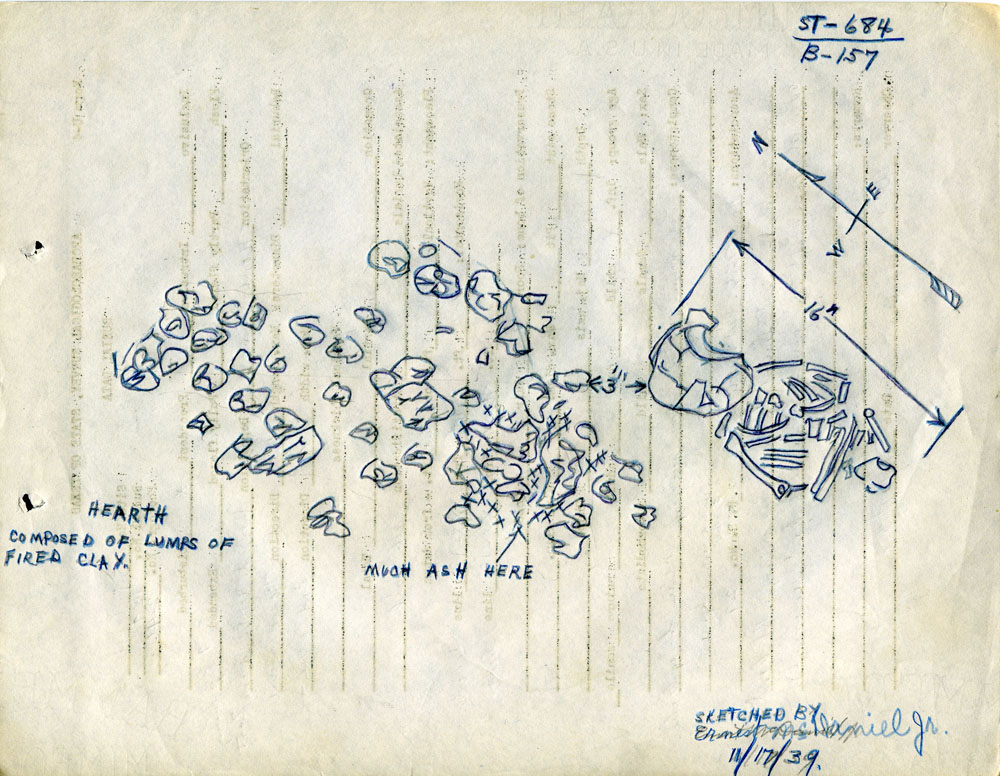 Sketch of one of the burials 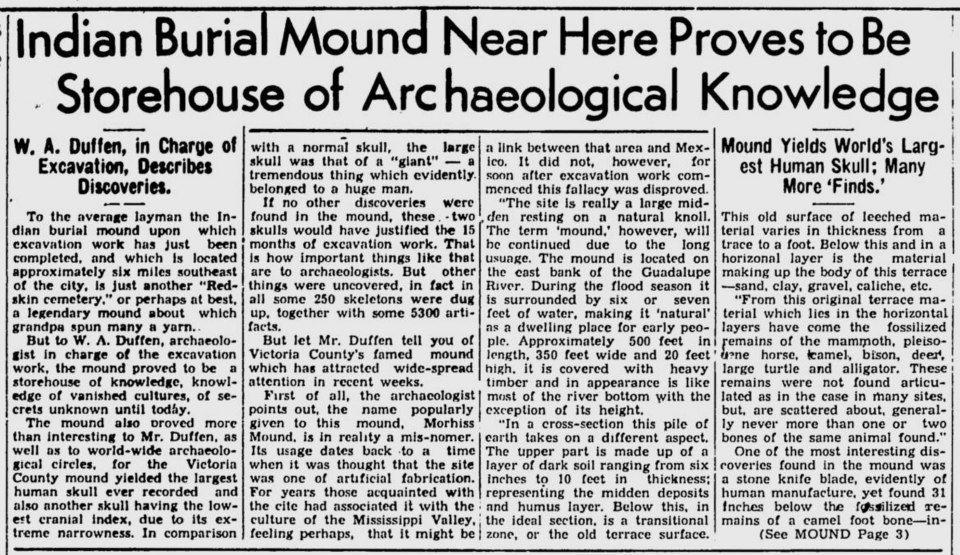