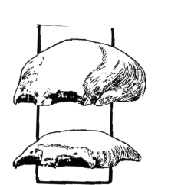 Made While Digging a Tunnel

The Long Looked For Proof That North America Was Inhabited By Man During the Great Ice Period Will Be Furnished It Is Believed, By This Find, Lansing

fragmentary bones of a prehistoric men that were found a few days ago
deep in a hillside of a Kansas farm are a point about two miles in a
northeasterly direction from Lansing, says the Kansas City Star.           The skull and other bones and their geological environment indicate the
skeleton to have been that of a . . . (ancient man). . . of the glacial or great ice period centuries ago.

That mankind existed during the glacial period has been established by discoveries in Europe, and while it has been presumed that man also lived in America at the same time, no dubitable evidence of the fact has heretofore been obtained. Lansing 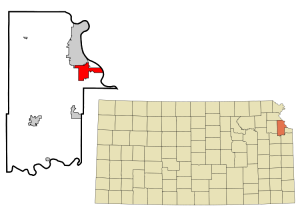 When the skull was found, it was not thought to have any scientific value. Several days ago M. C. Long curator of the Kansas City public museum, and Edwin Butts, civil engineer for the Metropolitan Street Railway company, both enthusiastic archaeologist, went to the place of the discovery and secured the fragments of the skeleton and brought them to Kansas City. Both Mr. Long and Mr. Butts are enthusiastic over the discovery. From the appearance of the skull and its position in the earth they are convinced it is that of a glacial man. If this fact be established, it will be the first proof of the kind found on the North American continent. In a short time the skull will be placed on view in the public museum.

The trace was completed

The facts of the discovery have been communicated to the Smithsonian Institute in Washington.

The find was made on the farm of Thomas and M. Cohncannon. They were digging a tunnel into a grerat hill on their farm with the purpose of using the excavation as a storage place for apples and other fruits. They dug directly into the side of the hill. The skull was found about sixty

five feet in. Other bones of the skeleton were beside it. One of
the farmers drove a pickax through the skull in loosening it from its
stony bed, and later bones fell on it, . . . . .
(Lets Stop there. This story of a small braincase and sloping forehead seems to have been an intentional fabrication. As the skull is large and the body is large. Most skulls found in the US are large, as by every account. I would suggect that if a skull is fragmentary in the frontal lobe and the rest is fine, assume foul play)
. . . . so that it was broken into
half a dozen pieces, but Mr. Long has cemented it together. “Incorrectly” The skull is that of a man with hardly any forehead. Directly back from the eyes receads the frontal bone. The fragments found shop he had a big jaw. The skull is very thick and strong, and its back part is broad and well developed. The phrenologist avert that this
development at the back shows an abnormal nature. But there is no noble dome, no high and rounding forehead, that shows the development of intelligence. (Because of Amateur Fabrication.)
The skull practically intact, a portion of the lower jaw, a part of a
thigh bone and several other fragments were found. The bones
indicate the man to have been large. . . . The orbits
for the eyes are close together and appear exceptionally large. Over
the orbits are well developed ridges that probably denote perceptive
faculties. The bones were found huddled together. They lay partially
imbeded in hardpan. A close and exhaustive investigation showed
that the various strata of rocks and soils and the “water marks”
had never been disturbed vertically and neither had there been any
lateral disturbance of the hill. The skeleton evidently had been
deposited there before the great mass of rock and soil above and
about it. Had mound builders or Indians ever dug deep into the hill
they could not have avoided leaving traces of their excavation.

“When we first heard of the find, we deemed it the usual story of a ‘mound burial,’ said Mr. Long the other day. “our investigation shows beyond all doubt that is a skeleton of a man of the glacial period.. After a most exhaustive investigation, Mr. Butts and I reached the

conclusion the skeleton was deposited there during the glacial period
or drift. How long ago the ice period was is not definitely known;. . .
“The evidence is very conclusive that this was not a burial or intrusive deposit, as there was no evidence of any disturbance of the earth. The great depth at which the skeleton was found precludes any idea of a usual burial, and the stratification of the earth both over and under the skeleton shows that the bones lay ther while the mass of soil was deposited over them. Attached to the skull is a kind of stony formation or cement, such as is usually found attached to bones of the mastodon and quite similar to the formation found in the jaws of the mastadon in the public museum.”
Mr Long says that the
ground around which the skeleton was found shows, conclusive evidence
of its glacial formation.
http://americanindianshistory.blogspot.com/2011/07/curator-of-kansas-city-museum-likens.html

The public museum of