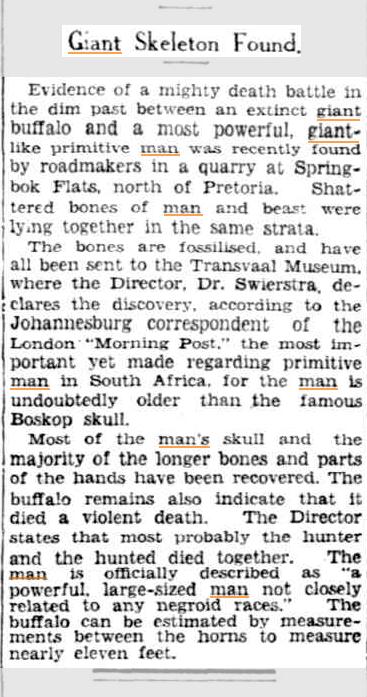 Evidence of a mighty death battle in the dim past between an extinct giant buffalo and a most powerful, giant- <*> like primitive man was recently found

by roadmakers in a quarry at Spring bok Flats, north of Pretoria. Shat tered bones of man and beast were lying together in the same strata. The bones are fossilised, and have all been sent to the Transvaal Museum, where the Director, Dr. Swierstra, de clares the discovery, according to the Johannesburg correspondent of the London” “Morning Post,” the most im portant yet made regarding primitive man in South Africa, for tbe man is undoubtedly older than J,he famous Boskop skull. Most of tbe man’s skull and the majority of the longer bones and parts of the bands have been recovered. The buffalo remains also indicate that it died a violent death. The Director states that most probably the hunter and the hunted died together. -The man is officially described as “a powerful, large-sized man not closely related to any negroid races.” The buffalo can be estimated by measure-, ments between the horns to measure nearly eleven feet.